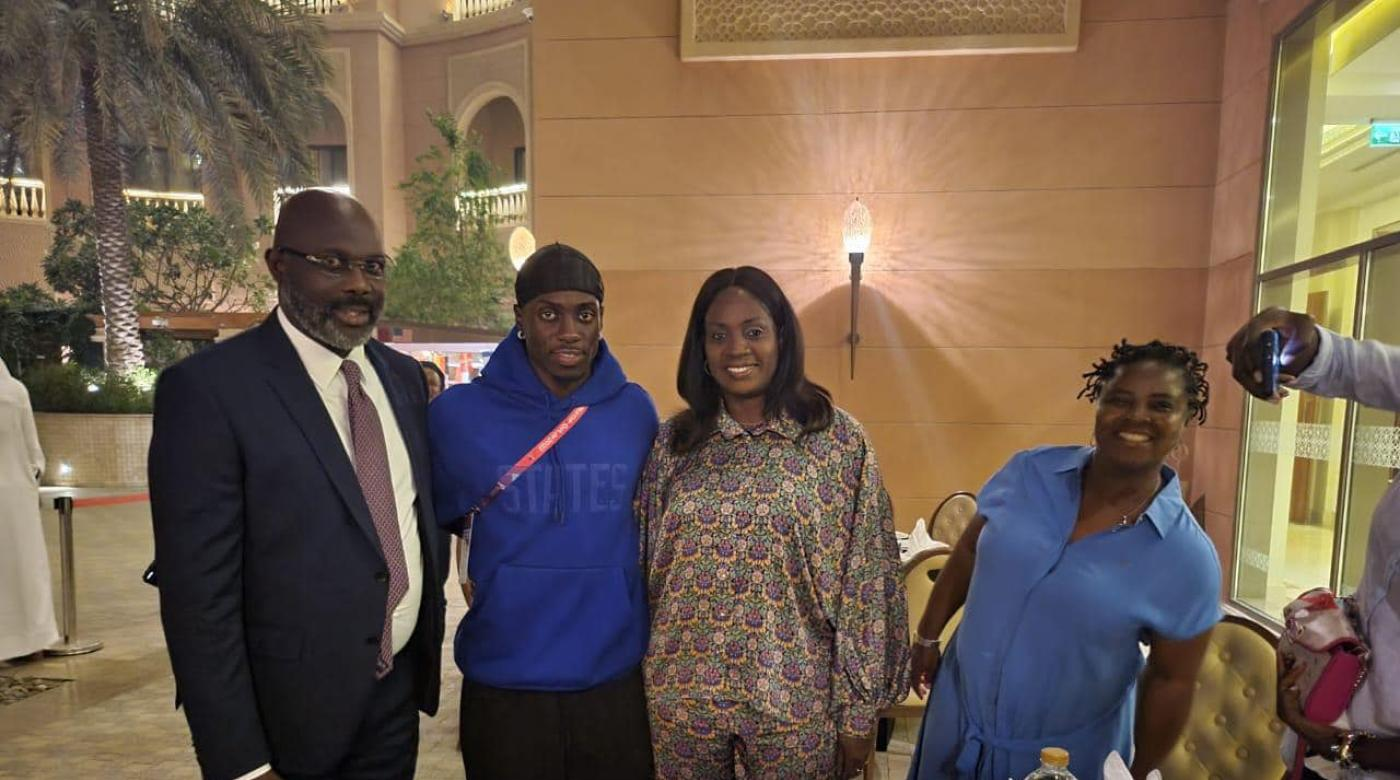 President Weah, left, and his son, Timothy Weah, and his wife, First Lady Clar Weah and Ministry of State Chief of Protocol, Nora Finda Bundoo in Doha, Qatar, just a day after the USA and Wale game, in which the President son scored in.

The President’s trip, which has seen him watch his son play his first World Cup match, could cost as much as or more than his incidental allowance, once the accommodation and per diem costs of his entourage factor in.

President George Weah’s decision to be out of the country for 48 days, which includes a nine-day stop in Qatar to watch the FIFA 2022 World Cup, could cost the country more than US$96k — more than what his government appropriated to some leading government hospital.

Weah, who has been out of the country since November 1 and is now in Qatar to watch his son, Timothy Weah, playing for the United States in the World Cup, is “entitled” to US$2,000 Incidental Allowance for each day of stay abroad according to Finance Minister, Samuel Tweah.

The President is expected to return home on December 18 — making his trip probably the longest by a sitting president in the modern history of Liberia.

The incidental allowance for the President’s 48-day trip (Nov. 1 to Dec. 18) alone cost US$96,000 which excludes costs of accommodation and per diem, for himself and his entourage — irrespective of the country the President is visiting.

The President’s trip, which has seen him watch his son play his first World Cup match, could cost as much as or more than his incidental allowance, once the accommodation and per diem costs of his entourage factor in.

Also part of the entourage are Weah’s Special Aide, Sekou Kalasco Damaro; Ministry of State Chief of Protocol, Nora Finda Bundoo; and some members of the presidential security detail.

According to the government’s revised travel ordinance document of 2016/2017, which is still used today, “the President as head of delegation shall be given in addition to the entitled accommodation and per diem an incidental allowance of US$2,000 for each day of stay abroad for any extra accommodation charges and other incidental expenses irrespective of the country he/she is traveling to. This amount shall be accounted for, including submission of relevant hotel and other receipts on return.”

However, the total number of days to be spent on any particular trip, according to the document, shall not exceed 7 days for which per diem and accommodation shall be funded by the government.

But this is not the case with Weah who has, as of today, spent 24 days out of the country, “to hold a series of bilateral and multilateral meetings with his counterparts and business executives,” according to a Nov. 1 communication from his office to Senate, about his absence from the country, which should have initiative ended on Nov. 23.

The total cost of Weah’s trip, which the Minister of Finance last week refused to disclose when he appeared on Spoon Talk, a widely-monitored online TV show, could pass US$500,000, considering other causes.

In perspective, this would be more than double the amount the Weah administration budgeted for the Saclepea Comprehensive Health Center in Nimba County, which got US$75,000 in fiscal year 2022 budget; or more than the US$100,000 appropriated in the same budget year for the only hospital (Liberian Government Hospital) in Grand Bassa, the fourth populated county in Liberia.

The President’s lengthy absence from the country, comes after he had extended his trip abroad by an additional 25 days. The notice of the extension was contained in a letter he dispatched to the Senate on Nov. 18.

Earlier, the President had written to the Senate, saying that will be  absent from the country from Nov. 1- 23 “to hold a series of bilateral and multilateral meetings with his counterparts and business executives.”

But on Nov. 18, while in Doha, Qatar,  he extended the trip for 25 days, saying he will not be returning home until December 18.

“It has now become necessary to extend my trip abroad due to other official engagements requiring my travel to France, Monaco and the United States of America,” according to the President’s dispatch to the Liberian Senate.

Weah, according to the dispatch, is expected to attend the 13th Edition of the Peace and Sports International Forum in Monaco, France, where he is expected to serve as Special Guest of Honor from Nov. 30 to Dec. 3.

Since taking office, Weah has faced public criticism for the frequency of his international visits, with critics claiming that he is abusing the privilege. The President is accompanied on these trips by a retinue of public officials, that included ministers, designated special advisers, other aides and required security detail — all at the expense of the Liberian taxpayers.

In 2018, Weah’s foreign trips, according to the Ministry of Finance and Development Planning budget that year, cost Liberia, which has more than 50 percent of its population living in poverty and is suffering from broken economy, over US$1 million

According to the 2022 budget, the President’s foreign trips for the year will cost taxpayers US$1.6 million, a significant increase from the US$457,875 budgeted for the same purpose in the 2020/2021 budget. Local trips are estimated to cost US$1.7 million in 2022, noted the 2022 budget. Meanwhile, for his latest trip outside of the country, which is for 48 days, his team has said the foreign trip was already “yielding dividends’ ‘ for the country.