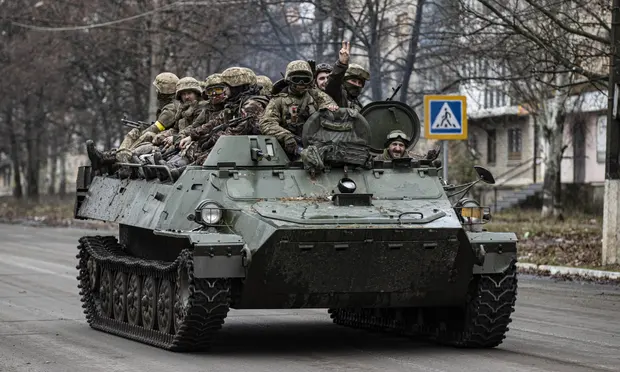 The Russian war effort in Ukraine is characterised by confusion among reservists over eligibility for service and inadequate training and equipment, according to the UK’s Ministry of Defence.

In its daily update, the MoD said some reservists were having to serve with “serious chronic health conditions” since they were called up during Vladimir Putin’s announcement of a “partial mobilisation”.

The soldiers are likely to have had heavy casualties while digging “ambitious” trench systems near the town of Svatove in the Luhansk oblast while they were under heavy artillery fire.

It added that Russian reservists have been killed in large numbers in frontal assaults into well-defended Ukrainian areas near Bakhmut in the Donetsk region. Both areas are in eastern Ukraine, towards the border with Russia.

The UK believes that the Kremlin is likely to be worried about reservists’ families who will risk arrest by protesting about the conditions their relatives face.

President Vladimir Putin, has met with mothers of Russian soldiers fighting in Ukraine, telling them that he had no regrets about launching his so-called “special military operation” and said he shared in their suffering.

In a pre-recorded meeting broadcast on state media, Putin told the soldiers’ mothers not to believe everything they see on television or read on the internet, claiming there were many “fakes” circulating about the conflict.

Sitting with the group of mothers around a table with tea, cakes and bowls of fresh berries, Putin said he and the entire Russian leadership understood and shared the pain of those who had lost their sons fighting in Ukraine.

I would like you to know that, that I personally, and the whole leadership of the country – we share your pain.

We understand that nothing can replace the loss of a son – especially for a mother. We share this pain.

He said he had no regrets about launching what he calls Russia’s “special military operation” against Ukraine, casting the war as a watershed moment when Moscow finally stood up to western hegemony.

The mothers’ comments to the president were not immediately shown in the recorded television clip.

German MPs are set to approve a motion to recognise the Holodomor, the death by starvation of millions of Ukrainians in 1932-33, as a genocide, German media is reporting.

Lawmakers are expected to vote on the resolution on Wednesday as Ukraine faces a potential hunger crisis this winter due to Moscow’s invasion.

The Holodomor should “join the list of inhumane crimes committed by totalitarian systems, in the course of which millions of human lives were wiped out in Europe, especially in the first half of the 20th century”, reads the draft text of the motion, seen by the newspaper Frankfurter Allgemeine Zeitung.

People across Ukraine, not just in grain-producing regions, were impacted by hunger and repression. This meets the historical-political definition from today’s perspective for genocide.

Ukraine has labelled the Stalin-era famine as a genocide, an assertion rejected by the Kremlin, and interpretations of the famine’s causes have caused friction between the two countries.

Robin Wagener of Germany’s Green party, one of the resolution’s initiators, said Russia’s president, Vladimir Putin, operated in the cruel and criminal tradition of Stalin”. He told Frankfurter Allgemeine Zeitung:

Once more, the basis for life in Ukraine is meant to be taken away through violence and terror, and the entire country brought to heel.

Calling the Holodomor a genocide was intended as a “message of warning” to Moscow, he added.

Germany’s foreign minister, Annalena Baerbock, welcomed “very much that there is a lot of support in the German parliament” for the motion, a spokesperson told reporters.