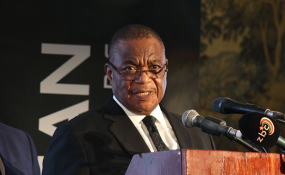 Government has, with immediate effect, fired all striking nurses after they refused to return to work even though the employer acceded to their demands and availed over $17 million. President Mnangagwa has endorsed the dismissal to ensure new people were immediately engaged to save the lives of patients.

The Health Services Board (HSB) has been instructed to speedily employ jobless trained nurses.

The HSB has also been directed to recall retired nurses.

In a statement yesterday, Vice President General Constantino Chiwenga (Retired), in his capacity as the supervisor of the Social Services Cluster, said the behaviour by the nurses was politically-motivated.

"Against a background of a series of meetings involving Government, the Health Services Board and the Zimbabwe Nurses Association (ZINA), which were meant to resolve the industrial action by nursing staff in the public health sector and the subsequent decision by Government yesterday to accede to the demands made by the striking nurses, Government regrets to note that the industrial action in this essential service sector has persisted," said VP Chiwenga.

He added: "What makes the whole action (by nurses) both deplorable and reprehensible is the fact that as agreed yesterday, Government released and transferred a sum of $17 114 446 into the account of the Ministry of Health and Child Care for on-payment to the striking nurses.

"While this demonstrated good faith on the part of Government, the prompt transfers which have been effected against demonstrable economic challenges facing our nation has not, quite surprisingly, persuaded the striking nurses to go back to their work stations in the interest of saving lives and helping hapless patients placed under their care."

VP Chiwenga said Government "now regards this lack of remorse as politically motivated" and "as going beyond concerns of conditions of service and worker welfare".

"Accordingly, Government has decided, in the interest of patients and of saving lives, to discharge all the striking nurses with immediate effect," he said. "Further, Government has instructed the Health Services Board to speedily engage, as appropriate, all unemployed, but trained nurses in the country. It has also authorised the board to recall retired nursing staff into service."

The funds originally released to meet the demands of the striking nurses will now be re-directed and allocated towards meeting the costs of effecting the new directive and arrangement, which takes immediate effect.

"In the meantime, Government pays tribute to all nurses who have loyally remained at work and to those from the ranks of the striking nurses who have heeded its call for them to return to work," said VP Chiwenga.

"Their commitment to duty and patients, both pointing to a deep regard for life as required by their professional oath, is noted and much appreciated."

Government has appealed to people visiting public health institutions to be patient while services are being restored.

It has urged Zimbabweans to practise good hygiene at home and in public places in view of sporadic cases of cholera reported in parts of the country.

The decision by Government to dismiss the striking nurses followed a series of meetings with them.

On Monday, ZINA met the HSB and Health and Child Care Minister Dr David Parirenyatwa and matters were escalated as they met VP Chiwenga.

It was at that meeting that an agreement was reached through the release of the $17 114 446 yesterday into the account of the Ministry of Health and Child Care to take care of all the issues raised by ZINA.

The agreement was that ZINA would get all its members back to work, but the nurses still did not report for duty.

VP Chiwenga then called for a second meeting yesterday to find out what was happening.

The meeting was attended by Minister Parirenyatwa, officials from the Ministry of Finance and the HSB.

Minister Parirenyatwa reported that the nurses had not reported back for work.

It was after the update that it was realised the nurses were out for a showdown with the State.

Three recommendations were then made – to dismiss all the striking nurses, recruit all qualified, but unemployed nurses and recall retired nurses.

The recommendations were taken to President Mnangagwa, who met VP Chiwenga, Minister Parirenyatwa, the HSB and officials from the Ministry of Finance.

Read the original article on The Herald.