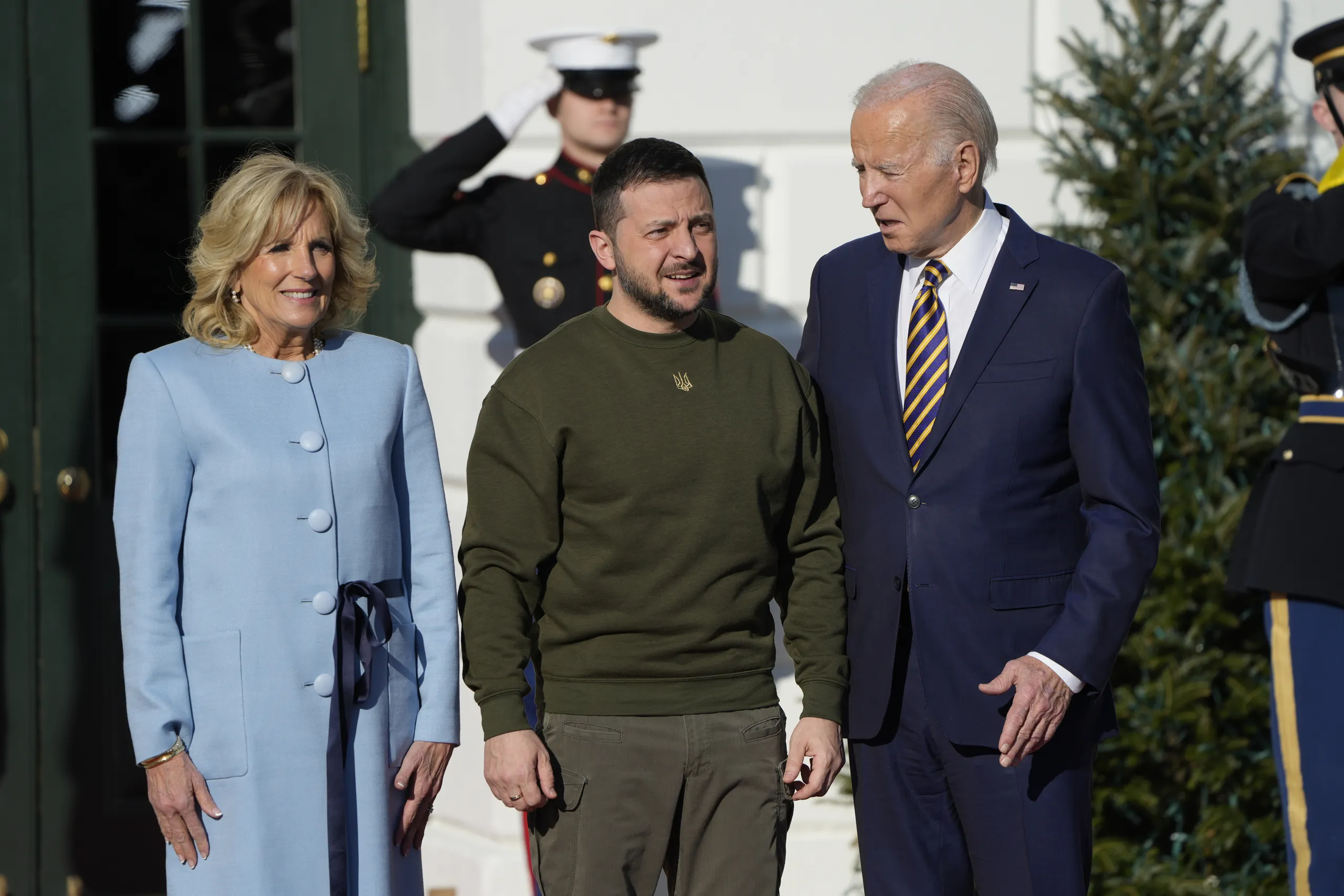 WASHINGTON – Ukrainian President Volodymyr Zelenskyy is meeting with President Joe Biden at the White House Wednesday and will deliver a prime-time speech before a joint session of Congress during a dramatic visit to Washington on the 300th day of the Russian attack on the U.S. ally.

He arrived at the White House for his historic mission a little after 2 p.m. and was warmly greeted by Biden and first lady Jill Biden.

Zelenskyy’s visit comes as Biden and Congress reaffirm their commitment to Ukraine by sending billions in humanitarian and military aid to the war-ravaged country, but it hasn’t come without pushback.

The Ukrainian president will speak tonight even as some Republicans are demanding greater accountability from Biden and top Defense officials on how nearly $50 billion in aid already disseminated has been spent.

Congress is set to pass another $44 billion in Ukraine aid through the omnibus spending bill expected to pass this week.

Zelenskyy’s visit – his first outside his home country since the war began in late February – comes with a sense of urgency. It’s a whirlwind, wartime trip that is seen as a major security risk for the Ukrainian president, and it’s an opportunity to make a personal appeal to Washington as he tries to bolster public and congressional support for the fight against Russia.

Biden and Zelenskyy kicked off their bilateral meeting at 2:15 p.m. ET in the Oval Office, with Biden telling the Ukrainian president the U.S. will support Ukraine’s pursuit of a “just peace.”

“I’m delighted you could make the trip,” Biden said, adding that Russian President Vladimir Putin is “escalating his assaults on civilians” and trying to “use winter as a weapon.”

The two leaders are expected to discuss all aspects of Russia’s war in Ukraine including what an end could look like.

Biden said the American people, “Democrats and Republicans, together with our allies,” have stood proudly with Ukraine to ensure financial humanitarian and security assistance.

“We’re going to talk about that today. We’re going to continue to strengthen Ukraine’s ability to defend itself, particularly air defense, and that’s why we are going to be providing Ukraine with a Patriot missile battery.”

Biden referenced Time Magazine’s recent recognition of Zelenskyy, telling him: “You are the man of the year.”

Zelenskyy, who handed Biden a medal, said he hoped to come to the U.S. earlier and offered “all my appreciations from my heart and from all Ukrainians. He thanked Biden, Congress and “ordinary people” in the U.S. for their support.

Zelenskyy arrived in the Oval Office with a gift for Biden, a military medal that had been earned by a Ukrainian captain on the front lines of the war. Zelenskyy told the president the captain – a “real hero” — wanted Biden to have it.