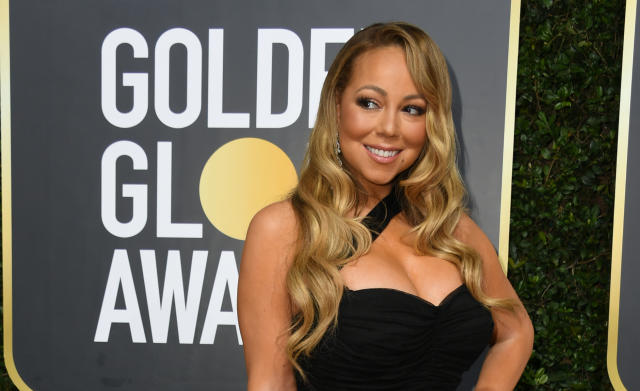 Mariah Carey bravely revealed a secret on Wednesday: In 2001, the singing sensation was diagnosed with bipolar II disorder — and she’s kept it under wraps for nearly 17 years.

While other big name celebrities — including Demi Lovato, Catherine Zeta-Jones, and the late Carrie Fisher — have spoken out about living with the mental illness, which can cause depressive and manic episodes, Carey never spoke of it publicly for all these years. “I didn’t want to believe it,” she explained to People magazine of the initial diagnosis. “Until recently I lived in denial and isolation and in constant fear someone would expose me.” Carey, who is in therapy and taking medication, finally spoke out because, “It was too heavy a burden to carry and I simply couldn’t do that anymore.”

The singer, who is 48 or 49, said that she was diagnosed when she was hospitalized during the summer of 2001. That was after her so-called “MTV Meltdown,” which is how it was described by the press at the time. She acted unusually during an appearance on TRL, which was hosted by Carson Daly. She came out unexpectedly wheeling an ice cream cart wearing a long “Loverboy” T-shirt, which she whipped off to reveal booty shorts and a tank top. (“She stripped!” the press wrote.) Then she oddly talked about the appearance being a much-needed “therapy session.” (“She was stammering,” the press wrote.) Daly said at one point, “Mariah Carey has lost her mind. I don’t know what’s going on.” Later in the episode he called it, “The most bizarre TRL I ever hosted,” as Carey mugged for the camera and handed out ice cream.

There were a few other things that happened in the following days that indicated she was unhinged — including her publicist literally grabbing the microphone from her hand when she started talking about her “haters” during another interview as well as Carey posting bizarre audio messages of voicemails on her website related to her record label. But from what Carey said later — and reporting including her E! True Hollywood Story — she had only slept for an hour a day for a month prior and she felt overworked. Additionally, her Loverboy album had underperformed. She was also going through a breakup with her boyfriend of three years, singer Luis Miguel. It didn’t help that Howard Stern called her fat on his radio show.

Things came to a head on July 25, 2001, when she showed up in a manic state at her mom’s home and promptly passed out. Her mother called 911, and Mariah was hospitalized in Westchester County, NY. She was later treated at Silver Hill Hospital for Mental Health & Addiction in Connecticut, where she stayed for 12 days. It seemed she left too soon because she was hospitalized again in early September at UCLA Medical Center. 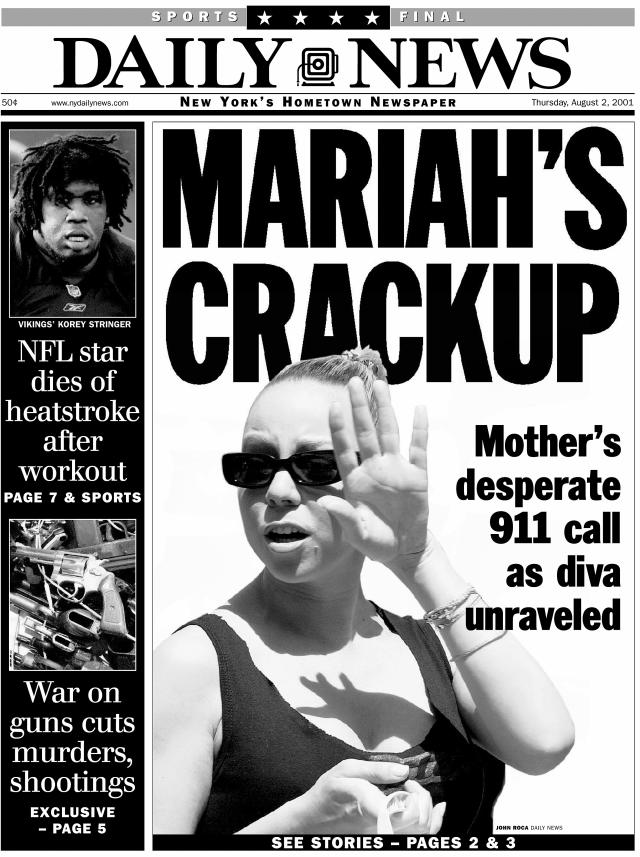 Life didn’t immediately get better for Carey after she apparently received her diagnosis and left the hospital. Her album Glitter was released on Sept. 11, the day of the terrorist attacks, so needless to say it didn’t do well. Ditto the movie of the same name, which came out soon after. By the end of 2001, she had made a deal, collecting $28 million, to be released from her record contract with Virgin Records.

When you wonder why she kept her diagnosis a secret from the public, we’ll point to the drama around her being hospitalized, which must surely have played into it. The next year, when she appeared on Oprah to talk for the first time about her “breakdown,” she said that reporters and paparazzi harassed her in the hospital to the point where she felt she couldn’t get any rest even there. And the speculation over what had happened to her was rampant. There were reports that she had tried to commit suicide, which she later said was untrue and expressed her worry that young fans would get bad ideas from it. There were also reports that she had an addiction issue, which her publicist categorically denied. (“It is not an alcohol or a drug problem. I can say that unequivocally,” said the rep.) Others reported that her breakdown was related to her breakup.

Watch Carey talk about her breakdown the following year on the Oprah Winfrey Show. It was the perfect time for her to open up about her mental health diagnosis. However, she talked openly about the breakdown, her hospitalization, and subsequent therapy, and then largely shot down the countless rumors related to her treatment:

On top of that, Carey was flat out made fun of over her breakdown. Of course, it didn’t help that her publicist had said she suffered from “extreme exhaustion.” It was really the first time that was used as an excuse — it was later overused by Lindsay Lohan’s handlers — and it became a punchline in tabloids and on late night TV as Carey was clearly dealing with some really serious stuff.

Paper magazine later noted that Carey’s “breakdown marked the beginning of our 24/7 celebrity coverage culture, as America went into denial of its deeper problems. Photos of her recovering at her mom’s house in pajamas made their way into the media stream, and her infamous appearance on TRL proliferated on YouTube.”

Her breakdown was discussed and analyzed with commentary from experts, her team, and even her own relatives in her E! True Hollywood Story:

In 2008, Carey reflected on her breakdown during an interview with Paper. “I didn’t have the right support system around me at the time,” she said, but noted that she felt there was something larger at play in the ways she was treated by the media. “It was after September 11th. A lot of people taking shots at me had no place to go. We are friggin’ ADD, this country. There’s a huge ADD situation.”

Of course, Carey is also a celebrity of a different era. While we’ve watched celebrities open up about being bipolar, suffering from anxiety, depression, and postpartum depression in recent years (see: Lovato, Selena Gomez, and Chrissy Teigen), this just wasn’t the conversation back then. However, now that she’s joined the conversation, Carey is ready to further the dialogue, telling People, “I’m just in a really good place right now, where I’m comfortable discussing my struggles with bipolar II disorder. I’m hopeful we can get to a place where the stigma is lifted from people going through anything alone. It can be incredibly isolating. It does not have to define you and I refuse to allow it to define me or control me.”