‘We used to wake up at 5am to fetch water’ 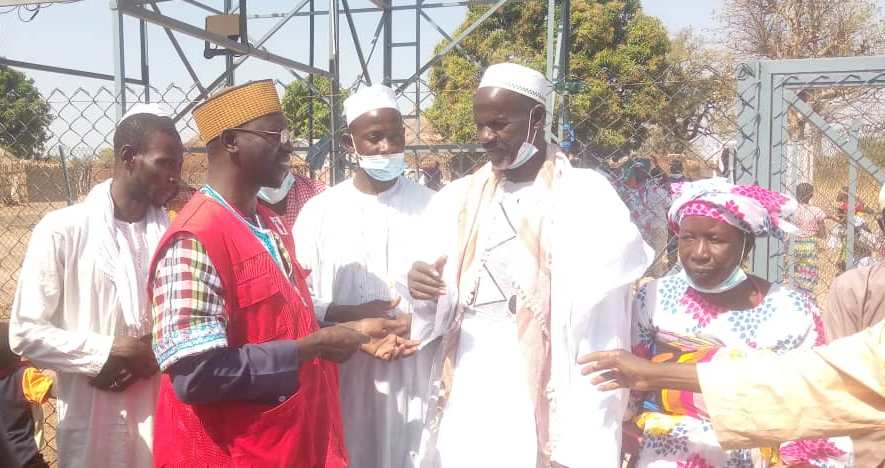 ‘We used to wake up at 5am to fetch water’

Chewdo Jallow, the women president for Jawo Kunda in Upper Fuladu West District, Central River Region, has said that they used to wake up at 5am to queue to fetch water before The Gambia Red Cross Society’s intervention.

The Gambia Red Cross Society (GRCS) in partnership with SolHEALTH and Unite and Be One Nation for Earth (UB-ONE) Foundation co-funded a solar powered water system for the community.

Speaking at the handing over on Sunday, Mrs. Jallow said each family was only allowed to fetch one bucket to ensure each compound had water to drink because their well dried up.

“Water for our animals to drink was a challenge because we were struggling to have enough water to drink, use for cooking and laundry,” she also said.

She noted that if one’s life is to be better, you need clean water and therefore thanked The Gambia Red Cross Society and partners for ending their suffering and making their lives better.

She added that the life changing solar powered initiative is also benefiting communities within their surrounding as they come to the village to fetch clean drinking water.

Alasan Senghore, Secretary General of The Gambia Red Cross Society, explained that three years ago, they realised that access to clean water was a problem in some parts of the country and decided to develop a project and partnered with SolHEALTH and Unite and Be One Nation for Earth (UB-ONE) Foundation to start a health system strengthening project where they do not only provide safe and clean solar powered boreholes but also support government in training community health nurses.

“We have been paying for tuition fees and stipends of nurses and with resources permitting us, we will continue to provide more boreholes for Gambian communities,” he noted.

SG Senghore encouraged the community to charge small fees and manage the money so that if there are problems, they could use that money to repair and maintain the borehole.

Ali Modou Touray, the chief of Upper Fuladu West, thanked GRCS and partners for providing the community with clean drinking water. He urged beneficiaries to ensure the sustainability of the project.

Fabakary Kalleh, the president of The Gambia Red Cross Society (GRCS), said their aim is to reduce suffering of people wherever they are.

Yaya Jobe, in deputising for the governor of Central River Region, thanked GRCS and partners for complementing government’s efforts. He advised the community to have an opening and closing time for the borehole to ensure it lasts long.

Amadou Drammeh, SolHEALTH Project Director, said they have piloted and completed compose latrines for communities in Central and Upper River regions in collaboration with the WASH project.