Ukraine Could Eventually Retake Crimea. How Would Crimeans Respond?

Ukraine Could Eventually Retake Crimea. How Would Crimeans Respond?

The peninsula had a complicated political history even before Russia seized control in 2014. 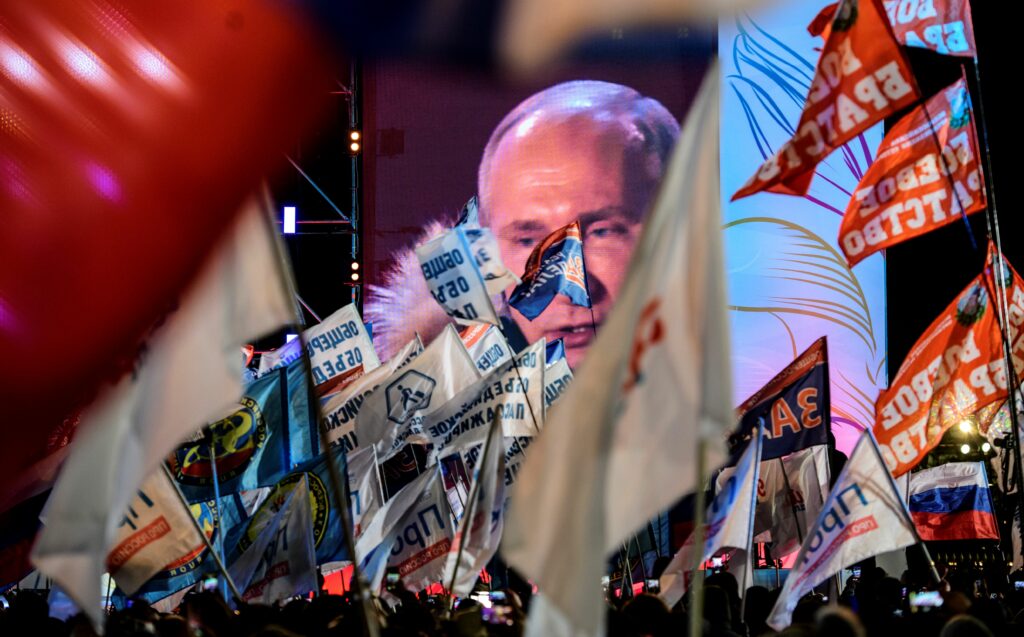 People listen to presidential candidate, President Vladimir Putin during a rally and a concert celebrating the fourth anniversary of Russia’s annexation of Crimea at Manezhnaya Square in Moscow on March 18, 2018. / AFP PHOTO / Mladen ANTONOV (Photo credit should read MLADEN ANTONOV/AFP via Getty Images)

Kherson is liberated. What’s next? There’s ample speculation—encouraged by Ukrainian President Volodymyr Zelensky—that the cities of Melitopol and Mariupol to the east might be next. That would break the “land bridge” that Russian forces control connecting Russia to Crimea. Thanks to the Ukrainian attack on the Kerch Strait Bridge in October, liberating Mariupol would cut off Russian forces in Crimea from their last supply lines.

The scenes of residents of Kherson rushing to greet and cheer their liberators will almost certainly be repeated when Melitopol and Mariupol fall. Mariupol was the scene of some of the toughest fighting of the first Russian invasion of Ukraine in 2014. Government forces were forced to evacuate the city in March before reclaiming it in June. Eight years later, when Russia re-invaded Ukraine, Mariupol was the site of the famous siege of the Azovstal Iron and Steel Works, where Ukrainian forces held out against overwhelming Russian bombardment for almost three months before Zelensky ordered them to stop resisting.

But what about Crimea? Unlike Kherson and Mariupol, the peninsula has been under Moscow’s control for years, not months. What kind of reception would Ukrainian forces find there?

In 2014, it was common to hear the explanation that Russian forces, the infamous “little green men,” were able to seize the 10,000 square-mile peninsula so easily because Crimea “wanted” to be Russian. Never mind the category error of applying a single desire to millions of people—it’s not clear that it’s even true in a metaphorical sense. In a 1991 referendum, Crimeans voted overwhelmingly to become their own autonomous republic within the USSR. Since World War II, Crimea had been administered first as part of the Russian component of the USSR, then as part of the Ukrainian component. Throughout the 1990s, authorities in the Kyiv and the Crimean capital of Simferopol bargained about how much autonomy Crimea would have within Ukraine. In 1994, 83 percent of Crimean voters supported allowing themselves dual Russian-Ukrainian citizenship.

Throughout the 1990s and 2000s, Crimea voted reliably with most of southern and eastern Ukraine in supporting candidates and parties friendly to Moscow. But in 2010, when Sergei Aksyonov led a party called “Russian Unity” in Crimea’s regional legislative elections on a platform of joining Russia, his party received just 4 percent of the vote. There’s a big difference between supporting friendly relations with an enormous neighbor and wanting to become part of that neighbor—just ask any Canadian.

The next time Crimeans voted on their allegiance was in 2014, after Russian forces had seized control of the peninsula. That sham referendum should be regarded as being of a piece with the ones Russian authorities recently staged in occupied Kherson, Zaporizhzhia, Donetsk, and Luhansk. (Aksyonov eventually got his wish: He’s been the head of the Russian authorities in Crimea since 2014.)

That was almost nine years ago, and Crimea isn’t the same as it was then. After annexing Crimea, Russian authorities forced residents to take Russian citizenship, forcibly deported people from the peninsula, conscripted locals into the military, persecuted political activists, oppressed religious and ethnic minorities, suppressed the Ukrainian Orthodox Church, and closed Ukrainian schools. The persecution of the indigenous Crimean Tatars has been particularly brutal. The number of people who left the peninsula is at least in the tens of thousands, though it is likely higher. Since February, the rate of population flux has only accelerated as Ukrainians from Kherson and Zaporizhzhia who found their homes overrun by the Russian Army often fled to Crimea, either because it was safer than the front lines or because it offered a path to a third country. Unknown thousands more were deported to Crimea forcibly.

At the same time, the Russian authorities imported new residents to replace those who had left and dilute those who remained. In a preview of tactics the occupation authorities in Kherson and Zaporizhzhia would attempt in 2022, the Russian authorities offered special incentives for the families of soldiers and other state employees to move to Crimea. Estimates range as high as 1 million. (Crimea’s total population is less than 2.5 million.) The tactic is classically Soviet: If there’s a public opinion problem, change the public. If anything, the massive population transfer is an indicator that Russian rule was unpopular.

Of course, it’s not as if the Russian authorities have allowed public opinion to develop naturally, anyway. Crimeans who attempt to organize politically are severely punished. Crimean Tatars, especially, are frequently accused of Islamic extremism, deported to Rostov in Russia, tried in military courts, and given harsh sentences. In one recent case, five activists were sentenced to between 15 and 19 years. Given these conditions, it’s not as though there’s been a lively public discussion about the relative costs and benefits of being part of Ukraine or Russia.

It’s possible that a negotiated settlement could result in a compromise on Crimea, possibly including granting the peninsula full independence from both Ukraine and Russia. Such an outcome is hard to imagine now, given the momentum the Ukrainians have at the moment, but it’s within the realm of possibility that Ukraine will ultimately not march all the way to Yalta.

That said, the Ukrainian government is almost definitely cultivating sources in Crimea that will help it gauge the reception its military is likely to receive. The shape of the military operation to retake the peninsula will depend on whether the population is expected to be primarily welcoming or more ambivalent. Ukraine’s future security and economic viability depend on Crimea not being held by a hostile power.

But more importantly, the 2014 seizure of Crimea was no more legal or justified than the attack on Kyiv in February. Ukraine is as justified in retaking Crimea as it was in retaking Kherson. The history of Crimea may be complicated, but the principles at stake are not.