Ugandan Judges only answerable to the law, own conscience- deputy CJ Buteera 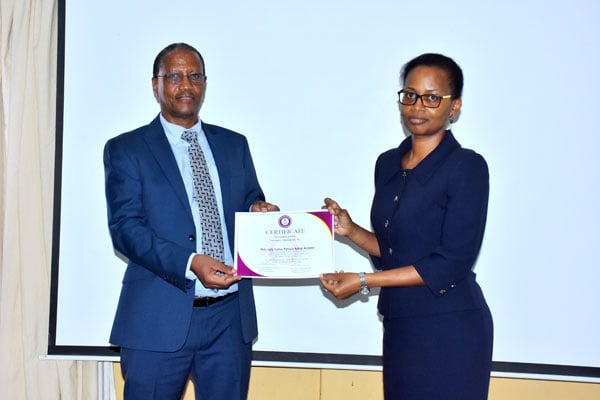 Ugandan Judges only answerable to the law, own conscience- deputy CJ Buteera

Deputy Chief Justice Richard Buteera hands over a certificate of attendance to Justice Patricia Kahigi Asiimwe at the closing ceremony of induction of the newly appointed High Court judges in Entebbe on November 25, 2022. Photo/ Eve Muganga.

The Deputy Chief Justice Richard Buteera has appealed to judges to always be professional while dispensing justice, arguing that they are answerable only to the law and their conscience.
“You’re judges and in the performance of your functions and exercise of judicial discretion, you’re not answerable to anybody except to your own conscience and to the law,” said Justice Buteera.

According to him, one of the critical areas the judges need to address is in the delays of delivery of judgment in cases before them.
“Where you hear cases, endeavor to write your judgments in time without accumulating them and causing delays that may later become difficult for you to handle. Despite challenges you may encounter, judicial work is a privilege and a nobble duty,” he said during the closing ceremony of the  two-week induction of the 16 newly appointed High Court judges and one Industrial court judge at Imperial Golf View Hotel in Entebbe on Friday.

At the start of the Financial Year 2021/ 2022 the country’s High Court had a workload of 41,010 cases, according to the deputy CJ.
“This means that each High Court judge has on average, 892 cases pending before him/ her which calls for hard work to manage both workload and case backlog,” he said before adding that with the newly appointed judges, the High Court bench will now have 72 judges.
He admitted that the increase in judges’ numbers will help boost the operalisation of High Court circuits of Moroto, Tororo, Iganga, Luwero, Hoima and Rukungiri.
“And this will significantly improve physical access to justice for the people in those areas, cut down on the costs of litigation and reduce court case delays,” he said.
To the new judges, the deputy reminded them of the essence of the oath they took.

“You made a commitment before God and man to administer justice to all manner of people without fear, favour, affection or ill- will. Keep it in mind that you should always live to that oath to avoid being perceived in the wrong way. Every Judge is a role model to the society to which he or she belongs, there are four qualities required of a Judge. These are; to hear courteously, to answer wisely, to consider soberly and to decide impartially thus you are enjoined to administer justice impartially and expeditiously,” he said.

According to him, if President Museveni happens to appoint more judges in the new financial year, it will help in the operationalisation of Nebbi, Bushenyi, Kasese, Kamuli, Kitgum, Lyantonde and Apac High Court circuits which will ease access to justice in the respective areas.
The executive director Judicial Training Institute (JTI), Justice Damali Lwanga said their mandate is to provide continuous training to the judiciary staff.
“Therefore, we shall continue to invite you (judges) for training workshops and other activities related to the training,” she said.