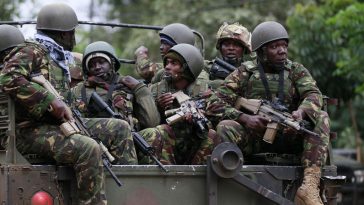 Cameroon security forces face accusations of human rights abuse as the French-speaking country attempts to deal with a security challenge from English-speaking groups in Anglophone areas as well as a Boko Haram insurgency in its far north region.

The U.S. State Department detailed the allegations in a report on human rights practices.

The report also goes on to say that the military, police and gendarmerie – paramilitary – forces were using among others arbitrary killings, forced disappearances and prolonged military / unofficial detentions in the three regions.

In its Executive Summary relating to the country, the report said: “The most significant human rights issues included: arbitrary and unlawful killings through excessive use of force by security forces; disappearances by security forces and Boko Haram’’

Then there was the issue of “harsh and life threatening prison conditions; violations of freedoms of expression and assembly; periodic government restrictions on access to the internet; trafficking in persons; criminalization and arrest of individuals engaged in consensual same-sex sexual conduct; and violations of workers’ rights.”

The government has since deployed a military unit the BIR, which continues to engage with Boko Haram insurgents in the Far North region. Communities in the region have been attacked mostly by suicide bombers and raids by the group.

Separatists have killed over 20 security forces and locals have fled their homes for fear of being caught in the cross fire with thousands now seeking asylum in neighbouring Nigeria.

Following the on-going crisis, there has been a sustained call for dialogue despite the government insisting that it will only engage with persons with the unity of the nation at heart

Over in the Anglophone region, guerrilla style attacks on security forces by suspected separatists under the so-called Ambazonia republic banner has led to the formation of a new military unit headquartered in the capital of the northwest region, Bamenda.

There has been a sustained call for dialogue to solve the crisis even though the government has insisted that it will only engage with persons with the unity of the nation at heart.