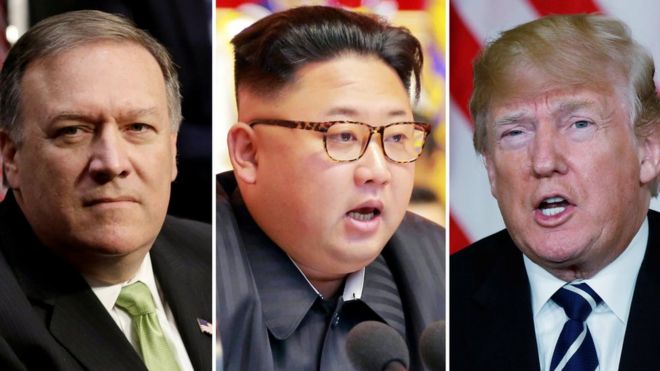 The surprise visit marks the highest-level contact between the United States and North Korea since 2000.

Mr Trump is expected to hold a summit with Mr Kim by June. Details are being worked out, the US president said.

South Korea has also signalled that it may pursue a formal resolution of the longstanding conflict on the peninsula. President Moon Jae-in and Mr Kim are due to meet next week.

The US president earlier gave his "blessing" for the talks between the South and North to discuss a peace treaty to formally end the 1950-1953 Korean War.

What do we know about the 'secret meeting'?

The news that Mr Pompeo had travelled to North Korea for a clandestine meeting with Mr Kim was first reported by The Washington Post on Tuesday.

The trip took place after Mr Pompeo was nominated by Mr Trump to replace Rex Tillerson as secretary of state, sources told the newspaper.

Very little is known about the talks other than that they were to prepare for the forthcoming Trump-Kim summit.

Mr Pompeo is predicted to be confirmed as the top US diplomat by the Republican-controlled Senate in the coming weeks.

How do the US and North Korea communicate?

The US does not have diplomatic relations with North Korea, although diplomats have visited in the past and so-called "back channels" are used to communicate with Pyongyang.

The last senior US official to meet a North Korean leader was Madeleine Albright, who was secretary of state when she travelled to Pyongyang for talks with Kim Jong-il, the father of the current leader.

In 2014, the then-head of National Intelligence James Clapper visited North Korea in a secret mission to negotiate the release of two US citizens.

Mr Clapper did not meet the North Korean leader.

Mr Trump stunned the international community last month by accepting Pyongyang's suggestion for direct talks. It would be unprecedented for a sitting US president to meet a North Korean leader.

He said the summit would take place either in early June or "a little before that" and that several sites were under consideration.

Analysts have speculated that a location for talks could be the Demilitarised Zone between North and South Korea, another Asian country, or a neutral European country. 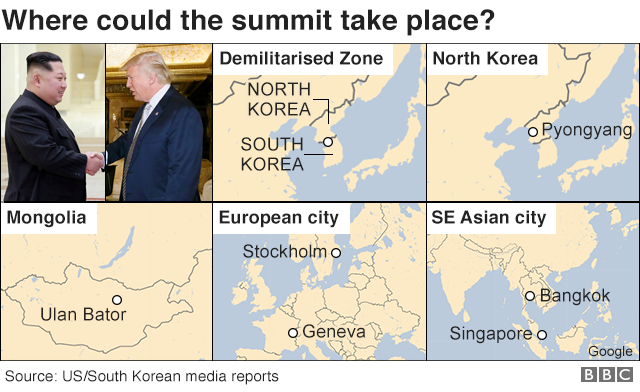 North Korea has been isolated for decades because of its human rights abuses and pursuit of nuclear weapons, in defiance of international laws and UN sanctions.

It has carried out six nuclear tests, and has missiles that it says could reach the US.

But South Korea's hosting of the Winter Olympics in February gave an unexpected window for diplomacy, and in the weeks since there have been a flurry of visits to the North from China, South Korea and now the US.

What does the timing of this news tell us?

News of Mr Pompeo's visit is likely to overshadow delicate talks with Japan, a key US ally and neighbour of North Korea.

There have been fears in Tokyo that Mr Trump's plans for bilateral talks could sideline Japan, and Prime Minister Shinzo Abe is currently in Florida for talks with the US leader.

Relations between the two men appeared cordial on this, the second time that Mr Trump has welcomed Mr Abe to his Mar-a-Lago resort in Florida.

Mr Trump insisted on Tuesday that the two countries were "very unified on the subject of North Korea", and Mr Abe praised the US president's handling of the North Korea issue.

However, observers say Mr Abe's goal for his US trip will be to persuade the US president as much as he can not to sway from the West's hard line on Pyongyang.

British PM May urges Gambia, others to legalise same-sex marriage