The US, UK and France have bombed multiple government targets in Syria in an early morning operation targeting alleged chemical weapons sites.

The strikes were in response to a suspected chemical attack on the Syrian town of Douma last week.

Explosions hit the capital, Damascus, as well as two locations near the city of Homs, the Pentagon said.

Russia's ambassador to the US responded by saying the attack on its ally "will not be left without consequences".

"The nations of Britain, France, and the United States of America have marshalled their righteous power against barbarism and brutality," President Trump said in an address to the nation from the White House at about 21:00 local time (02:00 BST).

"The purpose of our actions tonight is to establish a strong deterrent against the production, spread, and use of chemical weapons," he said.

The wave of strikes is the most significant attack against President Bashar al-Assad's government by Western powers in seven years of Syria's civil war.

At a Pentagon briefing shortly after Mr Trump's announcement, Gen Joseph Dunford listed three targets that had been struck:

Syrian state television said government forces had shot down more than a dozen missiles, and claimed only the research facility in Damascus had been damaged.

Three civilians had been injured in Homs, it said.

Reuters news agency cites a pro-Assad militia commander saying other locations were hit, including various sites close to Damascus: a military base in the Dimas area; army depots in the eastern Qalamoun; the Kiswah area, where Iran is believed to have been building a base; and a site in the Qasyoun hills, plus a research centre in Masyaf, further north. These reports are unverified.

Media captionFootage showed missiles in the night sky in Syria

US Secretary of Defence James Mattis told journalists there were no reports of US losses in the operation.

In his earlier address, President Trump had said: "We are prepared to sustain this response until the Syrian regime stops its use of prohibited chemical agents."

But Secretary Mattis said that "right now, this is a one-time shot". Gen Dunford confirmed the wave of strikes had ended.

Gen Dunford said the US had specifically identified targets that would "mitigate" the risk of Russian casualties. But the Pentagon said that Russia – which has forces on the ground in Syria in support of the government – had not been given advance notice of the targets.

UK Prime Minister Theresa May confirmed British involvement, saying there was "no practicable alternative to the use of force".

But she also said the strikes were not about "regime change".

In a further press briefing on Saturday morning, she said that while the assessment of the strike's results is still ongoing, she was confident of its success.

Media captionMay: 'We are acting together with our allies'

UK strikes carried out by four Tornado jets hit one of the targets mentioned by the Pentagon – a military site near the city of Homs which is believed to have housed precursor materials for chemical weapons, according to the UK Ministry of Defence.

"Dozens of men, women and children were massacred with chemical weapons," he said of the Douma incident a week ago – adding that "the red line had been crossed".

Analysis: Will this time be different?

This attack was more significant than the US strike against a Syrian air base a little over a year ago, but at first sight seems more limited than President Trump's rhetoric may have suggested. 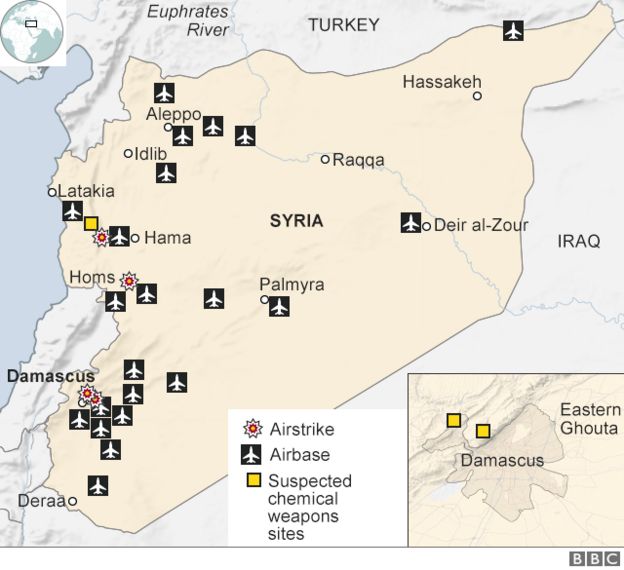 Last year some 59 missiles were fired. This time a little over double that number were used.

The strikes are over for now, but there was a clear warning that if the Assad regime resorts to chemical weapons again then further strikes may well follow.

Care was taken, say the Americans, to avoid both Syrian and "foreign" – for that read Russian – casualties.

But the fundamental questions remain. Will President Assad be deterred?

Last year's US strike failed to change his behaviour. This time, will it be any different?

The international Organisation for the Prohibition of Chemical Weapons (OPCW) has dispatched a fact-finding mission to the site of the alleged attack in Syria. Investigators were due to start their probe later on Saturday.

"The American, French and British aggression against Syria will fail," it said.

The Syrian presidency has tweeted a short video of Bashar al-Assad walking into his office at 09:00 local time with the caption: "Morning of steadfastness".

In his speech, President Trump said Mr Assad had committed "the crimes of a monster".

A US official told Reuters news agency that Tomahawk cruise missiles were used against multiple locations in Syria.

Secretary Mattis also said the scale of the strikes was about "double" what was launched in April 2017 after a chemical attack on the town of Khan Sheikhoun that killed more than 80 people. 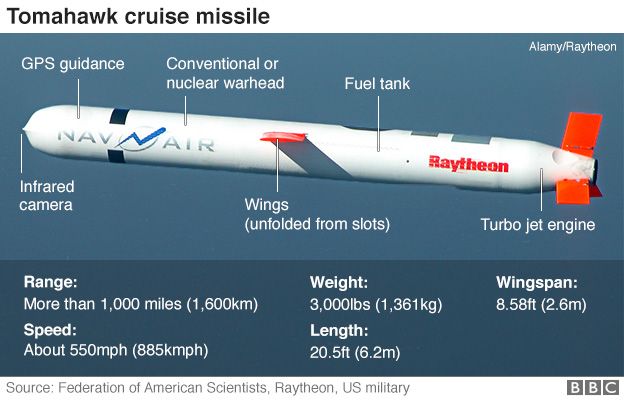 British-based monitoring group, the Syrian Observatory for Human Rights, suggested that more targets than the three listed by the Pentagon had been hit.

It said western forces had struck "scientific research centres, several military bases, and the bases of the Republican Guard and Fourth Division in the capital Damascus and around it."

One Damascus resident told BBC News: "It was mayhem above us."

"I saw more than 20 anti-air missiles launched. They'd fly really high then start weaving across, like they were following their target.

"I didn't see the cruise missiles, but I saw some falling debris nearby."

What has the reaction been?

Reaction to the strikes was mixed among the international community.

Russian President Vladimir Putin said he "condemns the attack in the most serious way".

The Nato Secretary General, Jen Stoltenberg, tweeted support for the strikes, saying those who use chemical weapons "must be held accountable".

John Mc Cain, chairman of the Senate Armed Services Committee and a top Republican who is often critical of the president, applauded Mr Trump for taking military action.

Some Democrats argued that President Trump should come before Congress and receive authorisation for the use of military force.

"There's an obligation, particularly when dealing with matters of peace and security, to act consistently with the Charter of the United Nations and with international law in general," he said.

"I urge all Member States to show restraint in these dangerous circumstances."