President Donald Trump has defended his use of the term "mission accomplished" amid criticism following US, UK and French air strikes on targets in Syria.

He accused the "fake news media" of seizing on the term to demean the strikes, carried out in response to an alleged Syrian chemical weapons attack.

President George W Bush was ridiculed for appearing in front of a banner carrying the term during the Iraq war.

They have said the attack in Douma, in the Eastern Ghouta area near the capital, Damascus, was staged.

Catch up on the strikes:

Inspectors from the independent Organisation for the Prohibition of Chemical Weapons (OPCW) are now in Damascus. They have met Syrian officials and are expected to visit Douma soon.

US envoy to the UN Nikki Haley has said that new sanctions will be announced on Monday against Russian companies with links to Syrian President Bashar al-Assad.

Why is 'mission accomplished' controversial?

Mr Trump used the term to conclude a tweet on Saturday morning following the overnight attacks, after hailing the strikes as "perfectly executed" and thanking the UK and France.

President Bush's former press secretary Ari Fleischer was one of those who said it was not to be advised. 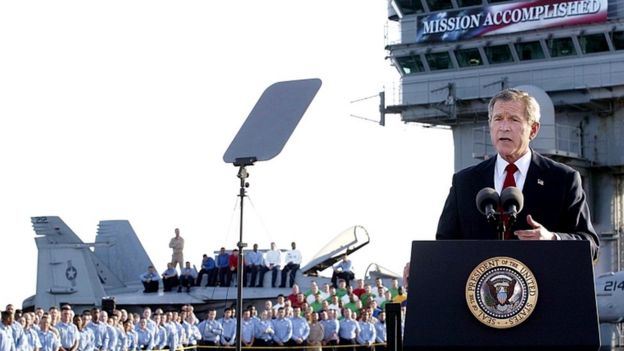 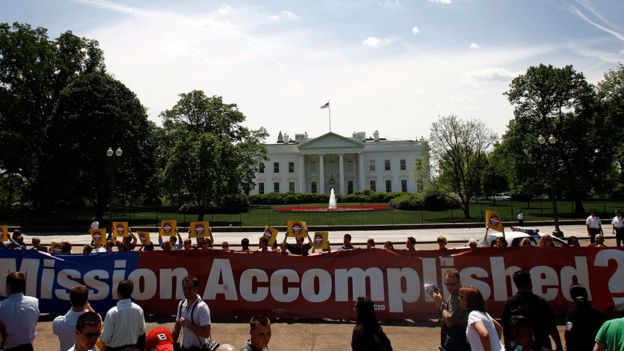 But Mr Trump fought back on Sunday, saying he knew the "fake news media" would seize on it but used it anyway as it was a "great military term".

The phrase had been on a banner as Mr Bush declared the end of "major combat operations" in Iraq in May 2003, six weeks after the US-led invasion of the country.

The following Iraqi insurgency, which dragged on for years, led to widespread ridicule of the term.

Ex-Assistant Secretary of State PJ Crowley said the use of the term at that time "represented a serious misreading of the challenge" in an article for the BBC, adding: "But Syria isn't Iraq. It's actually much more complicated."

What is happening in Douma?

The OPCW inspectors met Syria's Deputy Foreign Minister Faisal Mekdad and Russian officials for about three hours in Damascus on Sunday and are expected to begin work in Douma later.

The Syrian army announced on Saturday that Douma's Eastern Ghouta region had been cleared of the last rebel fighters and was fully retaken.

The inspectors will investigate the site of the alleged chemical attack, which the Western allies believe killed dozens of people with the use of chlorine gas and possibly Sarin.

The Russians say there is no trace of any chemicals and questioned why the allies carried out strikes before the inspectors had reported. Russia says the attack in Douma was staged, accusing the UK of orchestrating it.

The OPCW will not seek to establish – and publicly announce – who was responsible for the attack.

The UK, US and France have said the Syrian government was responsible.

Will there be more Western attacks?

Mr Trump said on Saturday that the US was still "locked and loaded" should any more chemical weapons attacks happen.

The wave of strikes had represented the most significant attack against President Bashar al-Assad's government by Western powers in seven years of Syria's civil war.

British Foreign Secretary Boris Johnson said on Sunday no further strikes were planned, but that this would be reassessed if more chemical attacks took place.

Mr Johnson told the BBC the strikes in Syria were meant to signal that "enough is enough" and their "primary purpose is to say no to the use of barbaric chemical weapons".

What is happening diplomatically?

Revealing the decision to impose new sanctions on Russian companies, Ms Haley also said the US would not withdraw the 2,000 troops it has working in Syria until it had achieved its goals of defeating the Islamic State group, preventing the use of chemical weapons and keeping a check on Iran.

This would be the second tranche of sanctions against Russian firms in a month, partly related to Russia's support for Syria.

On Saturday, Russia failed to win a vote in the UN Security Council condemning the "aggression" of the US-led strikes on Syria. Only China and Bolivia voted with Russia.

The vote followed bitter exchanges, with Russia accusing the allies of "cynical disdain" and the US saying that Russia had trashed diplomatic moves on chemical weapons.

The US, UK and France then circulated a new draft resolution to Security Council members, calling for an independent investigation into Syria's alleged use of chemical weapons. Similar previous plans have been vetoed by Russia.

The future of the Syrian war:

What was targeted by the US, UK and France?

Three sites. Firstly, the Barzeh complex, which the US says is a centre for development, production and testing of chemical and biological weapons, although Syria denies this.

The other two were suspected chemical weapons facilities at Him Shinshar near Homs.

The US said 105 missiles were launched and it believed none were intercepted by Syrian defences. It said Syria's chemical weapons programme had been set back years.

The Russians said 71 missiles were shot down by Syrian systems.

Both the Russians and the US said there were no reported casualties. Syria says three people were hurt near Homs. 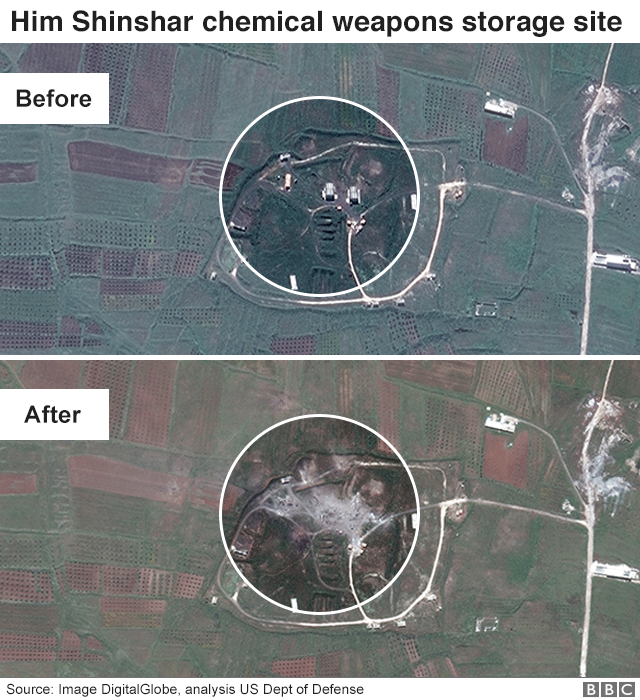