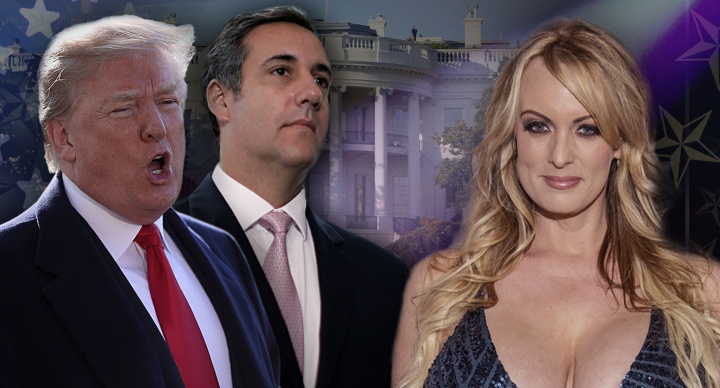 The campaign raised more than $130,000 — the amount Cohen paid her, and which she has offered to return — in a little more than a day.

“I am attempting to speak honestly and openly to the American people about my relationship with now President Donald Trump and the intimidation and tactics used against me,” Daniels, whose real name is Stephanie Clifford, writes on the campaign’s website. “But unfortunately, I do not have the vast resources to fight Mr. Trump and Mr. Cohen alone.”

Both Cohen and the White House have denied that any sexual encounter between Trump and Daniels ever occurred.

According to a lawsuit filed in Los Angeles Superior Court earlier this month, Daniels says that in October 2016, Trump, through Cohen, coerced her into signing a nondisclosure agreement to prevent her from speaking publicly about the year-long sexual relationship she says had with Trump beginning in 2006. In return, Daniels was paid $130,000 — a payment Cohen says he facilitated without Trump’s knowledge to protect the then Republican nominee.

In the suit, Avenatti and Daniels claim Trump never signed the agreement and that it should be null and void.

Last week, Daniels offered to return the $130,000 she received from Cohen, allowing her to speak freely about her alleged affair with Trump — and to “use and publish any text messages, photos and/or videos relating to the President that she may have in her possession, all without fear of retribution and/or legal liability for damages.” But under the terms of the agreement, if it stands up in court, she could be liable for a $1 million penalty each time she violates it.

In an interview with CNN on Friday, Avenatti said Daniels has evidence to back her claims.

“We have substantial evidence and facts that were not included in the complaint,” Avenatti said.

The complaint also alleges that late last month, Cohen “surreptitiously initiated a bogus arbitration proceeding” against Daniels. According to the suit, Cohen did so “without even providing [Daniels] with notice of the proceeding and basic due process.”

At the White House last week, press secretary Sarah Sanders cited that case in her response to a question about the allegations, saying, “This case has already been won in arbitration.”

“Yeah. And he also won the popular vote,” Avenatti said.

“I think when she’s allowed to speak openly, and the American people hear her explanation, they’re going to judge for themselves whether she’s credible,” he said.

The public explanation may be coming soon. Last week, Anderson Cooper sat down with Daniels and Avenatti for an interview that will be broadcast on an upcoming episode of “60 Minutes,” according to CBS.

On her fundraising page, Daniels said she “needs funds to pay for attorneys’ fees; out-of-pocket costs associated with the lawsuit, arbitration, and my right to speak openly; security expenses; and damages that may be awarded against me if I speak out and ultimately lose to Mr. Trump and Mr. Cohen.”

The campaign has elicited pledges from more than 4,000 people, many of whom posted messages of encouragement with their donations.

“Supporting your legal fees,” wrote another contributor to Daniels’ campaign. “If Mueller’s findings can’t take the Trump administration down, maybe your story can.”

Another echoed a famous remark by former FBI Director James Comey regarding a conversation he had with Trump: “Lordy, I hope there are tapes.”