The Constitutional Court said Thursday it had issued the suspension decision following a request from the Catalan Socialist Party, which opposes secession.
The parliamentary session was to have been Puigdemont's first opportunity to make a formal declaration of independence under a Catalan referendum law that the Constitutional Court had previously ruled illegal. 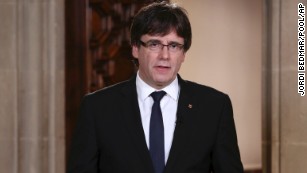 Catalan leader to King: You disappointed many 01:14

"We are considering what to do," Carme Forcadell, the regional Parliament's president, told reporters. "I can assure you that we will defend the sovereignty of the Parliament and the freedom of speech, as well as the lawmakers' right of initiative."
Forcadell called the court decision "an unusual and extremely serious event in a democratic Parliament" that violated "freedom of speech."
"We will not allow censorship into this Parliament," she said.
Asked by CNN about the court's decision, the Catalan government responded: "We will see."
In a televised address Wednesday, Puigdemont insisted that while others said the vote was illegal, Catalonia would follow "a democratic way" that should be respected.
He also criticized King Felipe for failing to heal the country's divisions, saying the monarch — who gave his own televised statement Tuesday in which he firmly backed the central government — had missed an opportunity to arbitrate in the dispute.
The Spanish government in turn said it "strongly rejects the accusations" Puigdemont directed at the King. "These accusations show that Mr. Puigdemont not only is against the law, but also is outside reality," the government said.
Asked whether the parliamentary session will take place, Puigdemont told CNN on Thursday, "That is for Parliament to decide. But the Constitutional Court has no right to impede a democratic parliament session, which by law is inviolable."

A political and constitutional crisis has gripped the country since Sunday's referendum, with Catalan separatists and the national government in Madrid each refusing to change course. 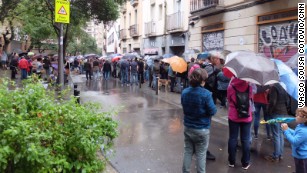 A look inside Catalonia's referendum vote 02:43
The ballot and its aftermath have divided Catalans. Some 90% of voters backed a split from Spain, but turnout was only around 42%, largely because anti-independence Catalans did not show up. The vote was marred by clashes between citizens and Spanish police in which hundreds of people were injured.
In a sign of the extraordinary tensions engulfing Spain, the head of the Catalan police, Josep Lluís Trapero, was summoned to appear Friday before high court Judge Carmen Lamela in Madrid on charges of sedition in connection with the referendum.
Trapero will comply with the summons, the press office for the Catalan police, the Mossos d'Esquadra, confirmed to CNN.
Spanish authorities believe Trapero's 17,000-strong force did not do enough to prevent the banned referendum from taking place.
Another sign of tensions was the decision of Banco Sabadell, one of Catalonia's largest banks, to move its registration outside the Catalonia region to the eastern city of Alicante, the bank said in a statement.

Any declaration of independence by the Catalan government would severely test the government of Prime Minister Mariano Rajoy, which could seek to use emergency powers.
If Madrid decides that Catalonia is acting unconstitutionally, Rajoy has the option of imposing direct rule on Catalonia under Article 155 of the Spanish constitution, drawn up after the Franco military dictatorship was toppled in 1975.
Catalonia crisis: Outside groups need to step in before it's too late
Regions such as Catalonia and the Basque Country were given sweeping freedoms and control, but the constitution also protected the integrity of Spain and gave Madrid powers to seize back control if regions acted beyond the law.
Such a move would be a last resort. Puigdemont told the BBC it would be "an error which changes everything."
It would also almost certainly require officers from the Guardia Civil, the national security force, to be deployed again on the streets of Catalonia.
Thousands are on standby in the port of Barcelona, and their redeployment would be highly provocative after they led the violent crackdown on Sunday's referendum.
Independence supporters are expected to march in silence later Thursday towards the military barracks used by Spanish police in protest at their presence.
A series of rallies for and against Catalan independence have been held in Catalonia and elsewhere in Spain, with more planned for the weekend.

Theresa May needs to resign for the good of Britain