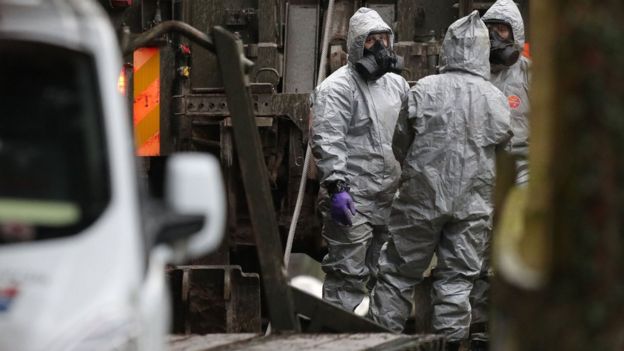 Former spy Sergei Skripal and his daughter were poisoned by a military-grade nerve agent of a type developed by Russia, Theresa May has told MPs.

The PM said it was "highly likely" Russia was responsible for the Salisbury attack.

The Foreign Office summoned Russia's ambassador to provide an explanation.

Mrs May said if there is no "credible response" by the end of Tuesday, the UK would conclude there has been an "unlawful use of force" by Moscow.

The chemical used in the attack, the PM said, has been identified as one of a group of nerve agents known as Novichok.

Mrs May said: "Either this was a direct action by the Russian state against our country, or the Russian government lost control of its potentially catastrophically damaging nerve agent and allowed it to get into the hands of others."

She said Foreign Secretary Boris Johnson had told the ambassador Moscow must provide "full and complete disclosure" of the Novichok programme to the Organisation for the Prohibition of Chemical Weapons.

Mrs May said the UK must stand ready to take much more extensive measures, and these would be set out in the Commons on Wednesday should there be no adequate explanation from Russia.

Retired military intelligence officer Mr Skripal, 66, and his daughter, Yulia, 33, were found slumped on a bench in Salisbury city centre on Sunday 4 March. They remain in a critical but stable condition in hospital.

Det Sgt Nick Bailey, who fell ill attending the pair, remains seriously ill, but has been talking to his family.

Mr Skripal was convicted by the Russian government of passing secrets to MI6 in 2004, but given refuge in the UK in 2010 as part of a "spy swap".

Home Secretary Amber Rudd will chair a meeting of the government emergency committee Cobra on Tuesday to discuss the latest developments in the case.

What are Novichok agents?

Addressing the Commons following a meeting of the government's National Security Council, Mrs May told MPs the positive identification of this chemical agent was made by experts at the UK's Porton Down laboratory.

She said Russia has previously produced the agent and would still be capable of doing so.

The decision to point the finger at Moscow was also based on "Russia's record of conducting state-sponsored assassinations and our assessment that Russia views some defectors as legitimate targets for assassinations", the PM added.

Labour leader Jeremy Corbyn said "robust dialogue" with Russia was needed to avoid escalating tensions further – but he was heckled by other MPs when he raised questions about Russian oligarchs donating money to the Conservatives.

After her speech, the PM's spokesman said she was yet to speak to senior allies such as USA President Donald Trump, German Chancellor Angela Merkel or French President Emmanuel Macron, but there had been "conversations at a senior official level".

Nato Secretary General Jens Stoltenberg said the use of any nerve agent was "horrendous and completely unacceptable" and officials were in touch with the UK on the issue.

Downing Street said the incident was not an "article five" matter – a reference to Nato rules which say an attack on one member constitutes an attack on all.

White House press secretary Sarah Huckabee Sanders, meanwhile, said the "reckless, indiscriminate and irresponsible" attack was an "outrage", and the US "stands by our closest ally", the UK.

"The conclusion is obvious – it's another information and political campaign based on provocation," she said.

Earlier, asked whether Russia was to blame, President Vladimir Putin told the BBC: "Get to the bottom of things there, then we'll discuss this."

BBC political editor Laura Kuenssberg says the tone of the meeting between Boris Johnson and the Russian ambassador Alexander Yakovenko was "cool but firm".

She says the men did not shake hands and the foreign secretary expressed the "outrage" of the British public.