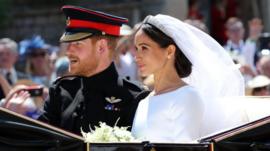 Prince Harry and Meghan Markle have become husband and wife in a moving ceremony at Windsor Castle.

An emotional-looking prince and his smiling bride exchanged vows and rings before the Queen and 600 guests at St George's Chapel.

At the altar, Prince Harry told her: "You look amazing."

Now married, the couple will be known as the Duke and Duchess of Sussex.

The guests, many of them A-listers, included Oprah Winfrey, George and Amal Clooney, David and Victoria Beckham and Sir Elton John, who later performed at the wedding reception.

Image caption Princess Charlotte with her mother, the Duchess of Cambridge

Most striking was a diamond bandeau tiara, loaned to her by the Queen, and a trailing five-metre silk veil embroidered with the flowers of each country in the Commonwealth.

Prince Harry and his brother and best man, the Duke of Cambridge, wore the frockcoat uniform of the Blues and Royals.

He was given special permission from the Queen to keep his short beard as it is customary to be clean-shaven when dressed in Army uniform.

Their 10 young bridesmaids and pageboys – including Prince George and Princess Charlotte – rose to the occasion.

However, the excitement became too much for one of the younger ones who started crying just before Ms Markle entered the chapel. 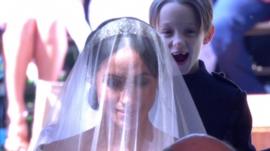 Prince Charles walked Ms Markle down the aisle, after her father, Thomas, was unable to attend for health reasons.

He told the US celebrity website, TMZ: "My baby looks beautiful and she looks very happy."

Ms Markle's mother, Doria Ragland, stayed with her daughter overnight before accompanying her to the chapel.

Dressed in a pale green Oscar de la Renta dress, with a neat hat, an emotional-looking Ms Ragland sat alone on the bride's side of the chapel for some time.

As the witnesses were called away to sign the register, Ms Ragland appeared to accept an outstretched hand from Prince Charles with some relief.

In her vows, Ms Markle did not promise to "obey" her husband, while the prince has broken with royal tradition by choosing to wear a wedding ring.

Prince Harry's ring is a platinum band with a textured finish and Ms Markle's has been made from a piece of Welsh gold. 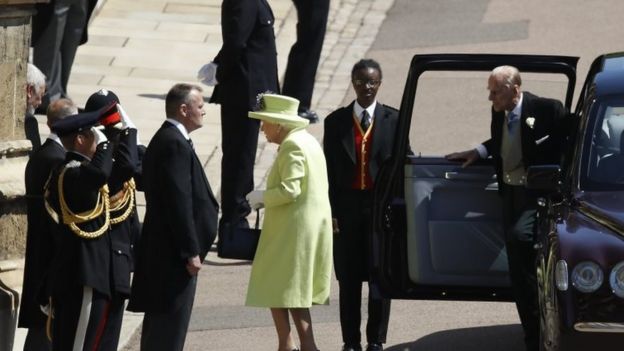 The Most Rev Bishop Michael Curry, the president of the US Episcopal Church, gave an address, the Rt Rev David Conner, Dean of Windsor, conducted the service and the Archbishop of Canterbury, the Most Rev Justin Welby, officiated.

"There's power, power in love," Bishop Curry, who was invited to speak by Ms Markle, said.

"If you don't believe me think about a time when you first fell in love. The whole world seemed to centre around you and your beloved."

In a fiery, passionate speech, he also referenced the African-American spiritual song Down by the Riverside, which was sung by slaves, and when he realised he had gone on too long, he told his audience he had better wrap up as "we gotta get you all married!"

Speaking afterwards, Bishop Curry said it was "a joyful thing" to see diversity in the ceremony, adding: "That happened today, in different ways, different songs, different perspectives, different worlds and all of it came together and gave God thanks."

Lady Jane Fellowes, the sister of Prince Harry's late mother, Diana, Princess of Wales, gave a reading from the Song of Solomon.

Karen Gibson and The Kingdom Choir performed Ben E King's soul classic Stand By Me during the service.

Image caption The Queen and the Duke of Edinburgh, who is recovering from a hip operation, were among the last to arrive

He was accompanied by musicians from the BBC National Orchestra of Wales, the English Chamber Orchestra and the Philharmonia.

After the service, the duke and duchess travelled through Windsor along a route lined by tens of thousands of well-wishers.

The Royal Borough of Windsor and Maidenhead said more than 100,000 people visited the town on Saturday.

It was a traditional wedding – the dress, the bridesmaids, the vows, the hymns. And it was very, very different.

The Palace made it clear in a stream of announcements that they wanted a different kind of wedding.

But it was the service that marked this out as a modern, diverse wedding for a modern diverse couple: the Kingdom Gospel choir setting toes tapping, a young black cellist, and a breathtaking address from Bishop Curry, the President of the Episcopal Church.

Every royal wedding is a chance for the Royal Family to relaunch and reinvent. There may have been trouble in the week before the wedding. But that is in the past. This wedding was about the future, a different future for the Royal Family.

All 600 guests were invited to a lunchtime reception at St George's Hall, hosted by the Queen. The best man, the Duke of Cambridge, acted as compere.

Guests were treated to a performance by Sir Elton John and were served langoustine canapés, Windsor lamb, and champagne and pistachio macaroons. Instead of a formal sit-down dinner, food was served in bowls.

The reception also included the cutting of the lemon and elderflower-flavoured wedding cake.

Guest Suhani Jalota, the founder of the India-based Myna Mahila charity, said Elton John performed a "mini-concert". She added that speeches by the Prince of Wales and the groom were "lovely", adding: "Some people were even crying."

Posting on Instagram, David Beckham said: "Watching Harry as happy as he was makes us all proud of the man and person he has always been… what a day."

Politicians, including Prime Minister Theresa May, were not invited, as it is not a state event.

But the former Prime Minister, Sir John Major, was among the invited guests, as he is a member of the Order of the Garter.

About 1,200 members of the public – many who were recognised for their charity work – were invited into the grounds of Windsor Castle for the wedding.

Among them was 13-year-old Leonora Ncomanzi, who was overjoyed when she got a wave from the bride herself.

"Meghan waved at me! When she was in the carriage, she saw me and waved – we've got it on video," she said.

And Pamela Anomneze, in her 50s, said it had been a "wonderful feeling" to catch a glimpse of the Queen.

On Saturday evening, the newlyweds will celebrate with 200 close friends and family at a private reception less than a mile from Windsor Castle at Frogmore House, hosted by Prince Charles.

Ms Markle is expected to break with tradition for royal brides and make a speech at the event.

The Royal Family will pay for the wedding, including the service, music, flowers and reception.