Updated | The U.S. will cut its 2018 contribution to the United Nations by $285 million—nearly 25 percent—an announcement that comes days after more than 120 nations criticized the United States for its decision to recognize Jerusalem as the capital of Israel.

Ambassador Nikki Haley made the announcement Sunday, but specifically blamed the world body for its budgetary excesses without making a specific reference to last week's vote on President Donald Trump's controversial Jerusalem decision.

“The inefficiency and overspending of the United Nations are well known. We will no longer let the generosity of the American people be taken advantage of or remain unchecked,” Haley said in a statement announcing the cut to the U.N.'s overall $5.4 billion budget. “This historic reduction in spending—in addition to many other moves toward a more efficient and accountable U.N.—is a big step in the right direction.”

Haley said there might be further budget cuts in the future. President Trump's proposed 2018 spending budget would end funding for U.N. climate change programs and would cut funding to the United Nations Children’s Fund, also known as UNICEF, by 16 percent.

Trump has long discussed cutting U.S. contributions to the U.N., and Haley hinted that the current administration could be motivated by a lack of support for its efforts around the world, specifically after the Jerusalem vote on Thursday.

"The United States is by far the single largest contributor to the U.N. and its agencies," Haley at the time. "We do this because it represents who we are. It is our American way. But we'll be honest with you. When we make generous contributions to the U.N., we also have a legitimate expectation that our goodwill is recognized and respected."

All 193 members of the United Nations are required to make payments as a part of their membership, but the amount each country must pay differs and is calculated by a formula that factors in population and gross national income. The U.S. currently funds about 22 percent of the U.N.’s $5.4 billion annual budget.

Members may also make voluntary contributions, and programs like UNICEF and the World Food Programme are funded entirely by this discretionary funding.

The State Department provides funding to the U.N. and, as such, follows the president's instructions. The federal departments of Agriculture, Energy, and Health and Human Services provide additional funding for specific U.N. programs with help from Congress. 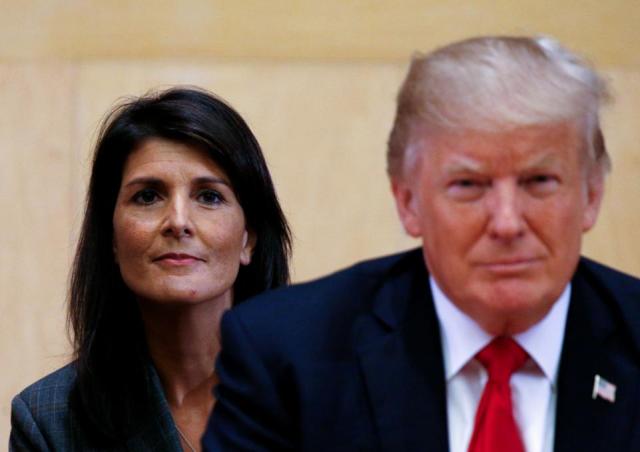 The U.N. peacekeeping budget was reduced by $600 million earlier this year after Trump pressured cuts. The president and Haley also threatened to cut off funding to any country that voted in favor of a draft resolution that asked the United States to reverse its Jerusalem decision.

“The United States will remember this day in which it was singled out in this assembly for the very act of exercising our right as a sovereign nation,” said Haley ahead of the vote. “We will remember it when, once again, we are called up to make the world’s largest contribution to the U.N., and we will remember it when many countries come calling on us to pay even more and to use our influence for their benefit.”

This article was first written by Newsweek