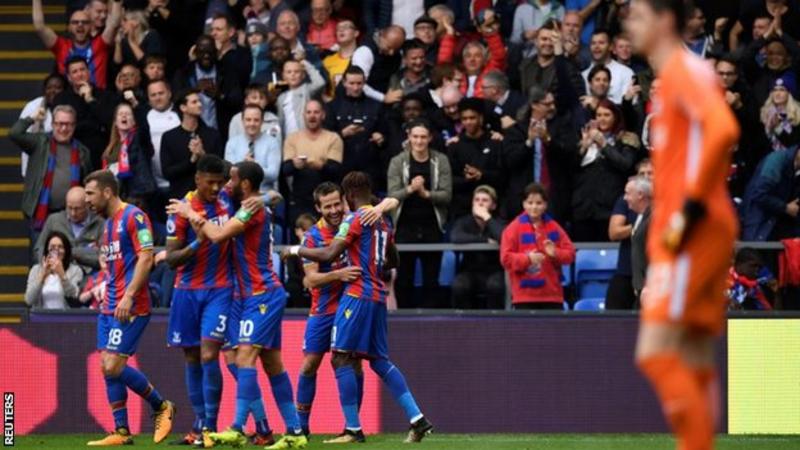 Manchester City scored seven against Stoke while rivals Manchester United were held to a goalless draw at Liverpool as Pep Guardiola's team went two points clear at the top of the Premier League on Saturday.

City had seen a 3-0 lead whittled down to 3-2 before taking the game away from their opponents after the break in blistering fashion for a 7-2 victory.

And at Anfield, Jurgen Klopp hinted that as boss of Liverpool he would not be able to deploy the sort of defensive tactics used by Jose Mouirnho's team after a largely dour encounter.

But the most dramatic action of the day took place at Selhurst Park.

Crystal Palace ended their 731-minute wait for a Premier League goal when Roy Hodgson's team took the lead 11 minutes into their match against champions Chelsea thanks to an own goal from Cesar Azpilicueta. 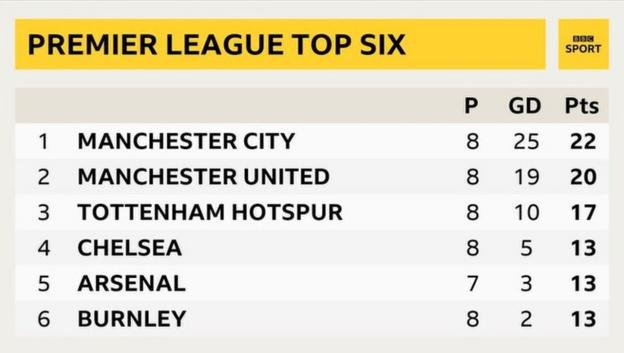 Chelsea soon equalised through Tiemoue Bakayoko but fans favourite Wilfried Zaha restored their lead on the stroke of half-time – the first league goal scored by a Palace player since Patrick van Aanholt struck in the last minute of their 4-0 win against Hull City on 14 May – and they held on to pick up their first points of the season.

Spurs had not won in three league matches since moving into Wembley but they finally ended that sequence with a 1-0 victory over Bournemouth – Christian Eriksen scoring early in the second half. They remain in third but have now moved four points clear of Chelsea.

It was a case of clumsy Andy Carroll at Turf Moor – the West Ham striker booked twice in 99 seconds for use of the elbow at Burnley. His team led in Lancashire for most of the match after Michail Antonio rounded the keeper before scoring into an empty net early on but Chris Wood equalised close to full-time for the home side.

In South Wales, Tammy Abraham scored twice as Swansea defeated Huddersfield 2-0 to ensure the Terriers' slump continued – they are now seven games without victory in all competitions. The result lifted the Swans out of the bottom three.

Want more reaction to the day's Premier League matches? We've got it all here.

In Scotland, Celtic remain top of the Premiership after defeating Dundee 1-0. It took Brendan Rodgers' team 61 minutes before they broke the deadlock through Olivier Ntcham with what turned out to be the only goal of the game.

Aberdeen won 1-0 at Hibernian and remain second in the table, trailing the leaders on goal difference, while Partick Thistle's wait for a league win this season goes on after Kilmarnock beat them 2-0.

Catch up with all the day's Scottish football here.

In the Championship, Bolton were another club ending a long wait for a goal. Sammy Ameobi's strike against Sheffield Wednesday was Bolton's first in 640 minutes of league football. However, the Trotters remain bottom of the table despite eventually winning 2-1.

Chris Wilder's Sheffield United ended the day level on points at the top of the table after defeating Ipswich, while in League Two Luton put seven past Stevenage. Afterwards Stevenage boss said Darren Sarll said: "It was a disrespectful performance to our town, our supporters and our club."