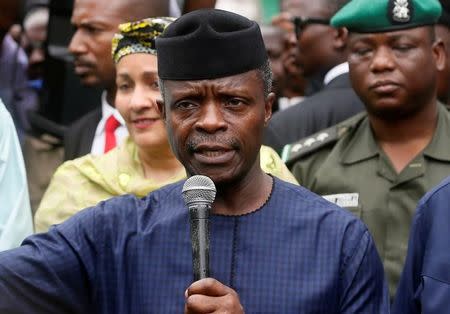 By Libby George and Karin Strohecker

LONDON (Reuters) – Nigeria's Vice President Yemi Osinbajo, who has served as acting president for much of this year, said on Monday he had not given any thought to contesting the country's next presidential election in 2019.

Nigeria has faced heightened uncertainty over whether President Muhammadu Buhari plans to contest the next election. Buhari, 74, took power in 2015 but has been absent for much of this year due to illness.

Osinbajo, a 60-year-old law professor, served as acting president during Buhari's absences, succeeding in calming tensions in the oil-producing Delta region and pushing small steps to improve the business climate, including foreign currency reforms. Some business leaders say he could provide stability by running for president himself in Feb 2019.

Asked at the FT Africa Summit in London if he had considered running, Osinbajo said he hadn't thought about it, adding: "None of that is on the cards".

Osinbajo also said that militants in the oil-producing Niger Delta region no longer posed a significant threat to oil production.

He said Nigeria had lost as much as 1 million barrels per day (bpd) of oil production last year amid militant attacks on oil and gas infrastructure, which is concentrated in the southern Delta region. It was now pumping roughly 1.85 million bpd and climbing toward 2 million bpd. That is closer to its top production of around 2.2 million bpd.

Still, he added that Nigeria needed to diversify its oil-dependent economy and take advantage of the resource while it was still in high demand.

"We don't have all the time in the world with oil," he said. "We have to use oil while it makes sense to do so."