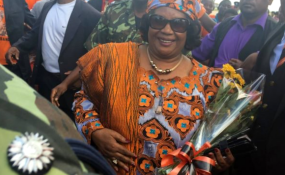 Hundreds of opposition People's Party (PP) supporters on Saturday turned out to welcome Malawi's former president, Joyce Banda, who has been abroad for four years.

Security has been tight, especially on road between the Blantyre commercial city and Chileka International airport.

Banda and her husband retired Chief Justice Richard Banda, waved the crowds on arrival sporting her signature attire of a wrap on her shoulder and had dark glasses.

The former Malawi leader addressed reporters at airport's VVIP lounge where she rebutted claims that she fled the country in 2014 when she lost power after being embroiled in the so-called Cashgate scandal, in which government officials siphoned off millions of dollars of public money.

Banda — only the second woman to lead a country in Africa — who landed at midday (1000 GMT) on a flight from Johannesburg, explained that after losing elections she went to a summit in United States and returned home.

She said after her two-year presidency she had to go US to have residency at the university that enables democratically elected former African leaders to spend up to two years at sharing insights on contemporary trends in Africa.

She said the purpose of staying abroad was to give "space" to her successor to govern, saying even in Malawi former president Bakili Muluzi left the country and stayed for long in United Kingdom at the start of his handpicked successor late Bingu wa Mutharuka.

"So I was not in exile, I had work to do and I have written a book on women empowerment after a research," said the activist and philanthropist Banda, the first female to serve as president of Malawi.

As the second female to lead an African nation, Banda helped turn her country's economy around and has been a longtime champion of women's rights.

As president of Malawi from 2012-2014, Banda was credited with turning around the nation's ailing economy. Under the economic reforms she instituted, Malawi's rate of economic growth rose from 1.8 percent in 2012 to more than 6.2 percent in 2014. In that same time span, Malawi's operational industrial capacity rose from 35 percent to 85 percent.

Banda also repealed a number of laws which had weakened democratic institutions, infringed on civil liberties and restricted freedom of the press. The health of women and children was a priority in Banda's presidency. She established the Presidential Initiative on Maternal Health and Safe Motherhood, which helped drop the maternal mortality rate in Malawi.

Before becoming president of Malawi, Banda served as the nation's vice president, foreign minister, minister of gender and child welfare, and as a member of its Parliament. As minister of gender and child welfare, she championed enactment of the Prevention of Domestic Violence Bill in 2006, which provided the legal framework to support the prevention and elimination of all forms of violence against women and girls.

Since leaving office, Banda serves on the boards of Nutrition International Canada and the Tana High Level Forum of Peace and Security in Africa. She is a member of the Council of Women World Leaders and a distinguished fellow with the Woodrow Wilson International Center for Scholars and the Center for Global Development.

The founder of the Joyce Banda Foundation International in 1997, Banda continues her work with the foundation today to transform villages in Malawi by supporting women's economic empowerment, education, maternal health and HIV/AIDS programs, leadership training and human rights. She also serves as a panelist and motivational speaker at international conferences and forums.

Her degrees include a bachelor's in gender studies from Atlantic International University and a master's in leadership from the Royal Rhodes University of Canada. She also is the recipient of two honorary doctorates: one in economics from Jeonju University of South Korea in January 2013 and the second in education from Wheelock College in May 2015.

There were fears that police would arrest Banda on arrival after it claimed there was a valid warrant of arrest.

"Dr. Joyce Banda is not afraid or intimidated by their announcement that their warrant of arrest is still valid because all Cashgate cases were investigated and prosecuted by the Anti-Corruption Bureau," Chanthuya said. "Now, the head of the Anti-Corruption Bureau has made it clear that JB [Joyce Banda] is not linked to any Cashagate, whether as a beneficiary or as a masterminder.

Banda, who came to power in 2012 when Bingu wa Mutharika, the current president's brother, died in office is scheduled to address a political rally in Zomba where she will explain her next political move.

JB founded the People's Party (PP) in 2011 after splitting from the Democratic Progressive Party (DPP), which is led by Mutharika.

Malawi will hold presidential, parliamentary and council elections in May 2019.

Nigerian Senator Dino Melaye and his many scandals