Thousands of people have protested in the Siberian city of Kemerovo, angry at Russian officials over the leisure complex fire that killed at least 64 people, 41 of them children.

Relatives say dozens of people – including children – are still missing.

Investigators say the fire alarm was switched off and exits blocked. Four people have been charged.

Another detained suspect – a guard from a private security firm – will be charged shortly, Russia's Investigative Committee says.

A national day of mourning will be observed on Wednesday.

What did protesters demand?

Several thousand people rallied outside the local government headquarters, saying that officials must be sacked over the fire safety shortcomings.

There were also some chants of "Putin resign!" 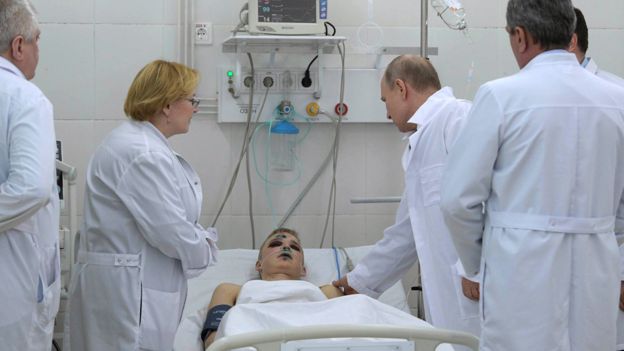 A woman in the crowd drew applause when she said "children called their parents, asked them for help, asked for the fire brigades to be sent in".

Many demonstrators said they did not trust the authorities and did not believe the announced death toll was accurate.

Officials were booed when they urged the crowd to disperse, after the protest had already lasted seven hours, Russia's RIA news agency reported.

Regional Deputy Governor Sergei Tsivilev then got down on his knees to beg forgiveness, and was applauded by the crowd.

President Putin expressed indignation over the disaster – though he did not speak to the crowd.

"People, children came to relax. We are talking about demography and are losing so many people because of what? Because of criminal negligence, sloppiness," he said.

What's the latest on the victims and the missing?

Russian investigators have so far confirmed the deaths of 64 people, 21 of whom have been identified.

Some of the bodies were badly burned in the Zimnyaya Vishnya (Winter Cherry) complex, and DNA tests will be required, the Investigative Committee says.

It says it is too early to publish the victims' list, "to avoid any mistakes".

Meanwhile, relatives of the victims say that another 67 people are missing – in contrast to Kemerovo's authorities, which have published a list of 38 people missing.

This added to the confusion, angering the public.

What caused the fire?

Officials are still investigating this. The blaze started on an upper floor of the complex at about 17:00 local time (10:00 GMT) on Sunday.

It was packed at the time as it was the beginning of the school holiday.

Senior regional official Vladimir Chernov was quoted as saying the fire probably began in the children's trampoline room on the top floor of the four-storey building.

"The preliminary suspicion is that a child had a cigarette lighter which ignited foam rubber in this trampoline room, and it erupted like gunpowder," he said.

However, Rossiya 24 TV, a national broadcaster, said an electrical fault was the most likely cause – as in most previous deadly fires in Russia.

Investigative Committee head Aleksander Bastrykin said the fire alarm at the complex had been down since 19 March, and nobody even tried to fix it.

He also said that the working public alert button was not activated by one of the guards "for unknown reasons".

Mr Bastrykin said investigators had found that many doors on the fourth floor were blocked. Three cinema halls and youth rooms were located on that floor.

He said the investigators believed this was done to prevent people without tickets from entering the cinema halls.

'There was no panic – she was saying goodbye'

At the scene: Sergei Goryashko and Elizaveta Fokht, BBC Russian

Kemerovo residents' anger has built up since Sunday and it burst forth at the rally of several thousand outside the city's administration building.

The main slogans were "Truth!" and "Resign!" – directed at local officials.

The most active among them was Igor Vostrikov, whose wife, sister and three children – aged two, five and seven – all died in the fire.

Deputy governor Tsivilev accused him of trying to gain publicity out of the tragedy. Igor's reply was that his entire family had suffocated in the cinema, unable to escape because the doors were locked.

Fighting back tears, he described his wife's last moments, when she phoned him, short of breath. "There was no panic – she was saying goodbye."

"I have nothing more to lose," he said.

Dozens of people vowed to stay on the square until governor Aman Tuleyev resigns.

10 Vital Parts Of The Controversial Ghana-U.S Military Deal You Should Know About