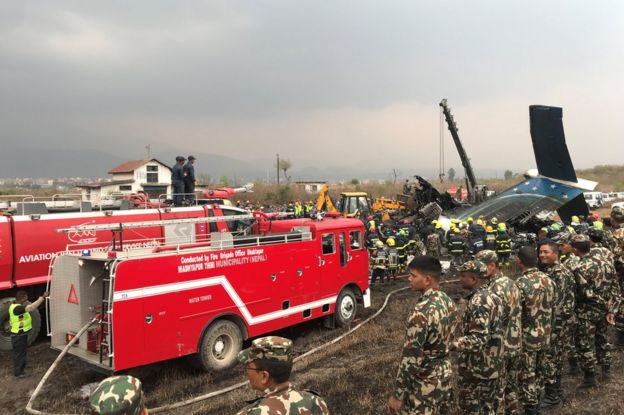 A plane carrying 71 passengers and crew has crashed on landing at Nepal's Kathmandu airport, killing at least 40 people. At least 22 survived.

Rescuers pulled bodies from the charred wreckage of the plane, operated by Bangladeshi airline US-Bangla, after a raging fire was put out.

Flight BS211 veered off the runway while landing on Monday afternoon.

The plane, which was flying from the Bangladeshi capital Dhaka, was a Bombardier Dash 8 Q400 turboprop and was 17 years old.

How did the disaster unfold?

The plane landed at 14:20 local time (08:35 GMT), according to flight tracking website FlightRadar24.

"The aircraft was permitted to land from the southern side of the runway flying over Koteshwor, but it landed from the northern side," Sanjiv Gautam, director general of the Civil Aviation Authority of Nepal, was quoted as saying by the Kathmandu Post.

"We are yet to ascertain the reason behind the unusual landing."

The plane caught fire and a plume of smoke could be seen above the airport.

One of the survivors, Nepalese travel agent Basanta Bohora, described from his hospital bed what he had experienced.

After a normal take-off from Dhaka, the plane had begun to behave strangely as it approached Kathmandu, he said.

"All of a sudden the plane shook violently and there was a loud bang afterwards," he was quoted as saying by the Kathmandu Post.

"I was seated near the window and was able to break out of the window," he added.

"I have no recollection after I got out of the plane, someone took me to Sinamangal Hospital, and from there my friends brought me to Norvic [Hospital]. I have injuries to my head and legs, but I am fortunate that I survived."

What do we know of the casualties?

The plane was carrying 67 passengers and four crew.

Of the 40 people killed, 31 died at the airport and nine in hospital, police sources told BBC News. A further nine are missing.

Among the 22 people injured, some are in a critical condition.