Jan. 6 panel to vote on urging DOJ to prosecute Trump on at least 3 criminal charges 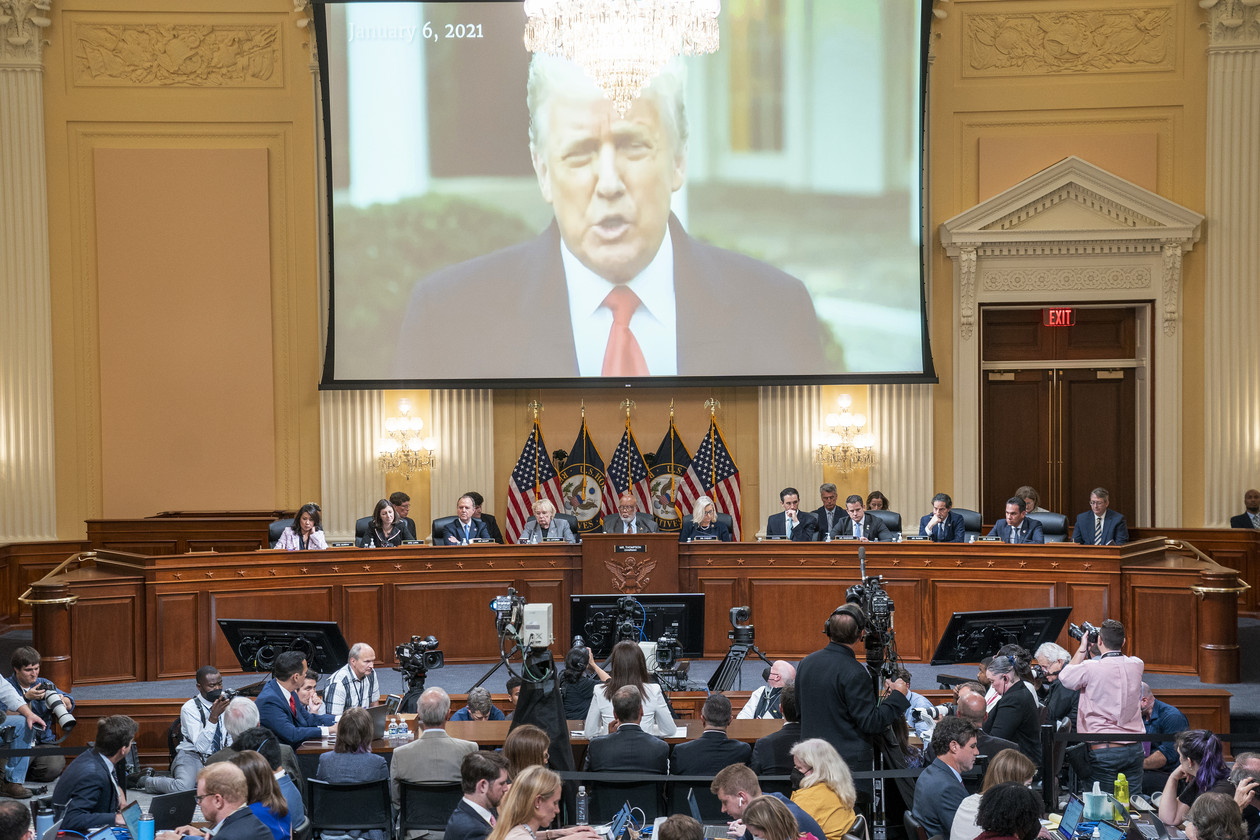 Jan. 6 panel to vote on urging DOJ to prosecute Trump on at least 3 criminal charges

The report that the select panel is expected to consider Monday afternoon reflects some recommendations from a subcommittee that evaluated potential referrals.

A video of former President Donald Trump from his January 6th Rose Garden statement is played at the Capitol, June 28, 2022. | Sean Thew/Pool via AP

By KYLE CHENEY and NICHOLAS WU

The Jan. 6 select committee is preparing to vote on urging the Justice Department to pursue at least three criminal charges against former President Donald Trump, including insurrection.

The report that the select panel is expected to consider on Monday afternoon, described to POLITICO by two people familiar with its contents, reflects some recommendations from a subcommittee that evaluated potential criminal referrals. Among the charges that subcommittee proposes for Trump: 18 U.S.C. 2383, insurrection; 18 U.S.C. 1512(c), obstruction of an official proceeding; and 18 U.S.C. 371, conspiracy to defraud the United States government.

It’s unclear whether the select committee’s final report will recommend additional charges for Trump beyond the three described to POLITICO, or whether it will urge other criminal charges for other players in Trump’s bid to subvert his 2020 loss. The document, according to the people familiar, includes an extensive justification for the recommended charges.

To justify incitement of insurrection, the report references U.S. District Court Judge Amit Mehta’s February ruling saying Trump’s language plausibly incited violence on Jan. 6, 2021, when a mob of his supporters besieged the Capitol in a bid to disrupt congressional certification of his loss to Joe Biden. The report also cites the Senate’s 57 votes in last year’s impeachment trial, Trump’s second, to convict him on an “incitement of insurrection” charge passed by the House.

The select panel’s report also notes that, in order to violate the insurrection statute, Trump did not need an express agreement with rioters — but rather, simply needed to provide “aid or comfort” to them.

“The January 6th un-Select Committee held show trials by Never Trump partisans who are a stain on this country’s history,” said Trump spokesperson Steven Cheung in a statement. “This Kangaroo court has been nothing more than a Hollywood executive’s vanity documentary project that insults Americans’ intelligence and makes a mockery of our democracy.”

DOJ, which is already pursuing a criminal probe of Trump’s Jan. 6-related actions, is not required to consider referrals from Congress, which have no legal weight. However, the select committee plans to act in the hopes that lawmakers’ input can influence prosecutorial decision-making. Panel chair Bennie Thompson (D-Miss.) has also raised the possibility of referrals to outside entities like bar associations for the constellation of lawyers involved in election subversion efforts.

The panel’s lawmakers have debated the value of referrals at length through the end of their investigation. But in recent days, they’ve made the referrals into a play for history and have stressed their symbolic nature, regardless of what DOJ or other entities might do.

The enormous cache of evidence the panel plans to release next week, including transcripts of over 1,000 witness interviews, could prove to be an even more significant development by helping federal prosecutors determine which leads to track and which witnesses may have committed crimes themselves.

Over the course of its probe the committee interviewed nearly every member of Trump’s inner circle — from his White House counsel Pat Cipollone to attorney Rudy Giuliani to his children Ivanka and Donald Jr. They interviewed members of Trump’s Secret Service detail, campaign team, attorneys and White House staff. And while some key witnesses pleaded the Fifth or invoked privileges that the committee could not pierce, many provided extraordinary evidence of Trump’s plot.

The panel has alleged for months that Trump knowingly spread false claims about the results of the election in order to upend the transition of power to Joe Biden. In the frenzied weeks following the Nov. 3, 2020 election, they say Trump systematically pressured state and local government officials, the Justice Department and his own vice president to help him seize a second term he didn’t win. When those efforts failed, they say he used the presence of a mob — which he knew the be armed — to attempt to derail the certification of the election by Congress.

The panel also contends that Trump falsely signed court documents attesting to evidence of election fraud that he was told was inaccurate and that he incited the crowd at a Jan. 6 rally by telling them to march on the Capitol and “fight like hell.” Amid the mob attack on the Capitol, they say Trump incited further violence by tweeting an attack on then-Vice President Mike Pence, who was fleeing from the mob at that very moment. And as the attack continued and allies pleaded with him to intervene, Trump refused to directly tell the mob to leave.

Instead, he continued watching the attack on television and held calls with allies to continue strategizing ways to remain in power.