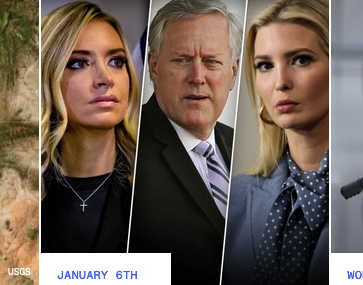 The panel says none of its witnesses provided evidence to suggest the election result was tainted, concluding that the claim was “a big scam.” It also alleges a plot to obstruct its work.

WASHINGTON — The House Jan. 6 select committee released an executive summary on Monday, highlighting a series of revelations and accusations against key figures who have testified as it prepares to wrap up its far-reaching investigation in the coming days.

A theme in the document is that the committee believes numerous figures close to former President Donald Trump were being less than candid during their testimony, either through evasions or claims that they couldn’t remember the answers to questions. In some cases, the committee said the purported memory lapses were not credible and appeared to be an attempt to conceal information.

The committee says Trump’s daughter and White House adviser Ivanka Trump “acknowledged” to them that she had agreed with Attorney General William Barr that there wasn’t evidence of election-altering fraud, that Trump pressured Vice President Mike Pence over his powers on the morning of Jan. 6, and that the president watched the Capitol violence on television in real time.

Yet the panel suggests that she knew more than she was letting on, contrary to others, like then-White House counsel Pat Cipollone.

“Ivanka Trump was not as forthcoming as Cipollone and others about President Trump’s conduct,” according to the executive summary, accusing her of exhibiting “a lack of full recollection of certain issues.”

She wasn’t the only White House official the panel called out. It said portions of former press secretary Kayleigh McEnany’s testimony “seemed evasive, as if she was testifying from pre-prepared talking points.” It added: “In multiple instances, McEnany’s testimony did not seem nearly as forthright as that of her press office staff, who testified about what McEnany said.”

During Monday’s meeting, the committee suggested that former Trump advisor Hope Hicks had also not been forthcoming in her testimony when asked about whether she had told the former president he needed to encourage his supporters to be peaceful.

The committee is pointedly questioning the honesty of others.

Its executive summary takes a highly skeptical view of Tony Ornato, who went from a high-level role at the Secret Service to become Trump’s White House deputy chief of staff in 2019, before returning to the Secret Service after Trump left office in 2021 — an unusual trajectory. He retired in August as his actions and the decisions of the agency were under scrutiny by the Jan. 6 panel.

The committee alleges former White House chief of staff Mark Meadows made false claims in his book that Trump never intended to travel to the Capitol on Jan. 6. The panel “became increasingly wary that other witnesses might intentionally conceal what happened. That appeared to be the case with Ornato,” according to the executive summary.

“Ornato does not recall that he conveyed the information to Cassidy Hutchinson regarding the SUV, and also does not recall that he conveyed similar information to a White House employee with national security responsibilities who testified that Ornato recalled a similar account to him,” it continues. “The Committee is skeptical of Ornato’s account.”

The panel adds that Ornato “had access” to intelligence about

An attorney for Ornato insisted that he “remained cooperative” and “testified truthfully before the committee on three occasions.” She added that the committee “did not fully appreciate or ignored Mr. Ornato’s testimony regarding the President’s request to go to the Capitol.”

Beyond that, the committee vaguely suggests there was a plot to obstruct the investigation, promising “further details” later.

It says an unnamed witness testified that she decided to fire a lawyer “who was receiving payments for the representation from a group allied with President Trump” — the lawyer appeared to advise her to avoid testimony that would reflect poorly on Trump, and “offered potential employment that would make her ‘financially very comfortable’ as the date of her testimony approached,” the committee says, according to the executive summary, adding that the client perceived ulterior motive.

Beyond that, the committee expresses “concerns” that other witnesses were “unnecessarily combative” while testifying, according to the executive summary, and says they unbelievably pleaded ignorance in certain situations — particularly those whose jobs or income were tied to Trump-affiliated groups like the American First Policy Institute.

Apart from the evasions and skepticism, the committee shines a light on another theme of its findings: None of the witnesses supplied evidence of election-altering fraud. Some even backtracked when put under oath on claims they had made publicly.

After the 2020 election, Trump lawyer Rudy Giuliani sparked a furor when he made a series of groundless assertions that Dominion voting machines had “flipped” votes from Trump to Joe Biden, which led to the suspension of his law license and a $1.3 billion defamation lawsuit.

“Other Trump lawyers and supporters, Jenna Ellis, John Eastman, Phil Waldron and Michael Flynn, all invoked their Fifth Amendment privilege against self-incrimination when asked by the Select Committee what supposed proof they uncovered that the election was stolen,” according to the executive summary.

Documents procured under subpoena also failed to produce such evidence, the panel says: “Not one of them provided evidence raising genuine questions about the election outcome. In short, it was a big scam.