Is it finally curtains for Amsterdam’s red light district? Sex workers will have to permanently cover their windows under city’s latest plan to crackdown on ‘nuisance tourism’ 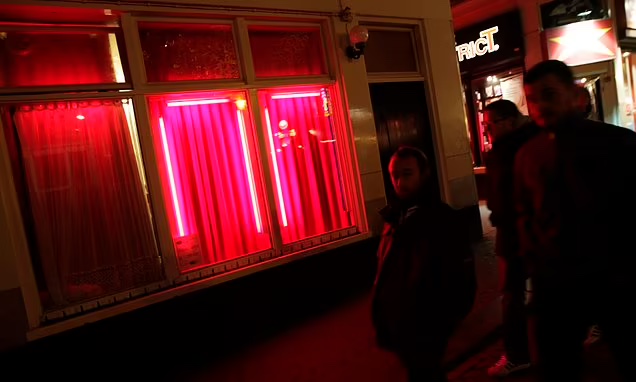 Is it finally curtains for Amsterdam’s red light district? Sex workers will have to permanently cover their windows under city’s latest plan to crackdown on ‘nuisance tourism’

Sex workers will have to permanently cover their windows under Amsterdam’s latest plan to crackdown on ‘nuisance tourism’ in the city.

The municipal council is expected to vote on the change this week in a bid to change the image of the De Wallen district.

Curtains on windows are only drawn if a worker is with a client, or they are not there at the moment.

The new plan would see clients book a visit by scanning a QR code with their phones, instead of directly communicating with the sex worker standing behind the illuminated window.

It has been opposed by the city’s sex workers on safety grounds, arguing that closing the curtains will make it harder for them to spot any dangers a client could pose.

Dutch sex worker ‘Lucy’ said that she will struggle to attract clients if the curtains are drawn.

‘They say it is for my protection, but that is nonsense. If someone denigrates me, I denigrate them back. It isn’t an automatic service I negotiate. If drunk people come, I don’t let them in,’ she told The Telegraph.

‘You register at the Chamber of Commerce, buy a set of lingerie and a box of condoms and you can begin.’

Ilana Rooderkerk, head of the local branch of the D66 liberal party, which proposed the change, said that sex workers are degraded by some of the city’s tourists and argued that it does not improve women’s position in ‘the MeToo era’.

The proposal will be voted on this week alongside plans to stop the sale of cannabis at weekends and limit stag parties.

The city is trying to reframe its global reputation for cheap and rowdy weekends away in favour of highlighting the gems of its cultural institutions.

For Amsterdam’s 880,000 permanent residents, groups looking for blow-out weekends have caused havoc and annoyance throughout the city, with British tourists some of the most prevalent offenders.

The new plans for Amsterdam would allow locals to take back their city and clean up the low-grade tourism that it has long been famed for.

The plans to clamp down on the nuisance tourism in Amsterdam were announced at the start of the month, with the city set to launch a ‘stay away’ campaign next year.

The campaign would look to discourage international tourists who were only looking to take advantage of the city’s more notorious amenities.

Under the new plans, bars and clubs would have limited opening hours and be closed by 2am, as well as window prostitution and brothels in the red light district having stricter opening times.

Smoking cannabis in certain areas of the city would also be outlawed. Plans are currently underway to close down some of Amsterdam’s cannabis coffee shops, a particular hotspot for tourists. There is also an existing alcohol ban in some parts of the city.

The city hopes that this would particularly deter bachelor parties from coming to Amsterdam, with more measures targeting this demographic set to be introduced in the near future.

The proposals to reshape Amsterdam’s culture will be put to the city’s council on December 21.

The city recently pledged to limit its tourism to 20 million guests each year. So far, it has already welcomed 18 million with many more expected over the Christmas period.
Source Daily Mail.