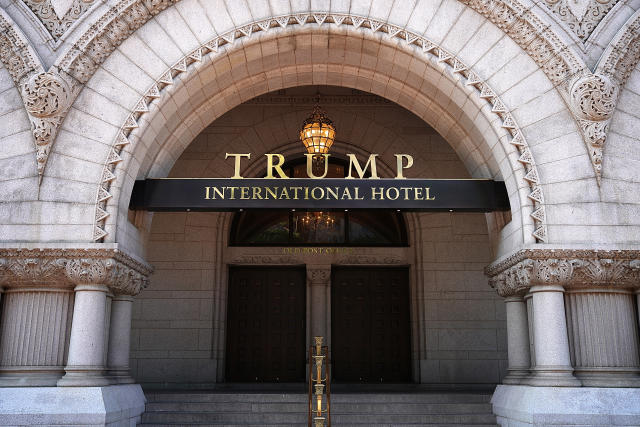 The Trump International Hotel is shown on Aug. 10, 2017, in Washington, D.C. The hotel, located blocks from the White House, has become both a tourist attraction in the nation’s capital and a symbol of President Trump’s intermingling of business and politics. (Photo: Win McNamee/Getty Images)
WASHINGTON — All 17 Democratic members of the House Committee on Oversight and Government Reform today filed a novel lawsuit against the Trump administration to force it to turn over documents about the Trump International Hotel Washington, D.C. — records, they say, that will reveal details about how the president is personally profiting while in office.

The lawsuit represents the latest legal challenge to Trump’s controversial decision to retain ownership of his international real estate firm, which operates the Trump International Hotel in a building leased from the government’s General Services Administration.

“This hotel is not just a building with Donald Trump’s name on it,” said Rep. Elijah Cummings, D-Md., the ranking Democrat on the House committee. “It is a glaring symbol of the Trump administration’s lack of accountability and a daily reminder of the refusal by Republicans in Congress to do their job. This may be standard operating procedure in foreign countries, but not here. Not in America.”

Guided by a Georgetown law professor, the Democrats are employing an unusual legal tactic to get Trump International Hotel records: They are using an obscure law, enacted during the presidency of Calvin Coolidge, that authorizes any seven members of the House oversight panel to obtain records from a federal agency.

The Trump International Hotel has been a lightning rod for the president’s critics ever since he took office last January. Almost immediately, the GSA stopped providing Congress with regular updates on the hotel’s expenses and profits under its government lease.

Nevertheless, some records about the hotel’s operations have surfaced: In August, the GSA “inadvertently” posted “privileged and confidential” documents showing the hotel earned $1.97 million in profits during the first four months of this year. The business has become a favorite of lobbying groups and foreign governments seeking to influence the administration.

The documents showing the hotel’s profits have since been removed from the GSA website and no further updates have been made available to the public or Congress. Asked for comment by Yahoo News, Pam Dixon, the GSA press secretary, emailed Thursday: “GSA does not comment on pending litigation.”

The lawsuit seeks GSA documents including monthly expense records so the committee can investigate “whether the Office of the Presidency is being used for private gain” and “the extent to which the Trump Hotel is receiving payments from foreign governments,” according to a “fact sheet” explaining the lawsuit, which was filed in federal court in Washington. The panel also wants to see records relating to why the GSA reversed an earlier legal interpretation of the lease, which prohibits any “elected official of the Government of the United States” from sharing in the profits of the hotel.

The lawsuit is not the first to be filed over Trump’s business operations while he is serving as president.  Three other suits have been filed contending that the president is receiving unconstitutional “emoluments” from foreign governments through his ownership of the hotel. 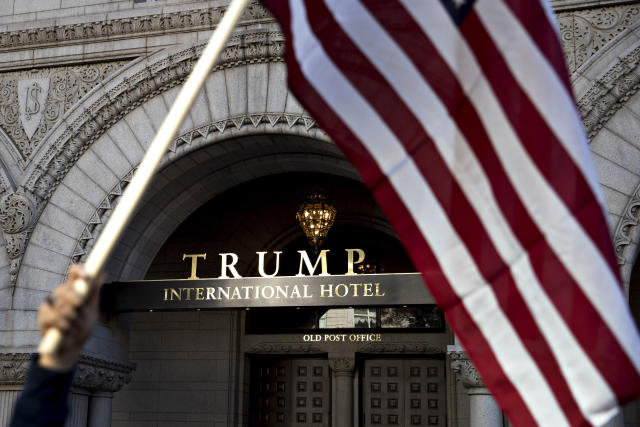 A demonstrator holds an American flag near the Trump International Hotel during a protest in Washington, D.C., on Oct. 18, 2017. (Photo: Andrew Harrer/Bloomberg via Getty Images)
A judge in New York is currently weighing a motion by the Justice Department to dismiss one of the suits on the grounds that the plaintiffs, including a liberal legal group, Citizens for Responsibility and Ethics in Washington, lack standing to bring the case because they can’t show they have been injured by the president’s conduct.

But the new lawsuit being brought Thursday by the House members is significant because, if it survives a court challenge, it could give congressional Democrats new leverage to pry documents out of the Trump administration on a host of other issues.

Their case relies on a little known law known as the “seven member” statute. Enacted in 1928 and signed by President Calvin Coolidge, it provides that any seven members of the principal House oversight committee can request—and receive–  reports and documents from federal agencies.

The law has only occasionally been used over the years—with varying results. Rep. Dennis Hastert (a future Speaker of the House) and Rob Portman (now a U.S. Senator), both Republicans, successfully invoked the law in 1994 to obtain documents about a Texas savings and loan from the Federal Deposit Insurance Corporation.

But in 2006, when Rep. Henry Waxman, then ranking Democrat on the House panel, along with other Democrats, filed a lawsuit under the “seven member” statute to obtain Medicare records from the Bush administration, they lost on the grounds they lacked “standing” to bring the case. (Before the Democrats had a chance to appeal, they regained control of the House that year and the case became moot.)

David C. Vladeck, a Georgetown law professor who drafted the complaint being filed today, said the House Democratic case gained new traction last summer after the GSA notified Cummings in a letter it would refuse to turn over records about the Trump Hotel. In doing so, a GSA official cited a new Justice Department Office of Legal Counsel opinion that the administration would only produce records when requested by a full committee or subcommittee (currently controlled by Republicans.)

“Individual members of Congress, including ranking minority members, do not have the authority to conduct oversight in the absence of a specific delegation by a full house, committee, or subcommittee,” the Justice Department legal opinion read.

“They basically said, ‘we’re not going to give the stuff to Democrats,’” said Vladeck. But in so doing, he argued, they ignored the fine print in the 89-year-old “seven member statute” and gave the Democrats new grounds to bring their lawsuit.

OPINION: All Testimonies Must be Public at the Janneh Commission