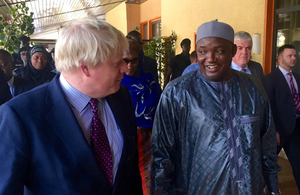 The Gambia’s return to the Commonwealth family is fantastic news. When I visited the country last year, I saw huge enthusiasm for the values and opportunities offered by our modern, diverse Commonwealth.

This shows that when a country commits to strengthening democracy, governance and the rule of law, it is welcomed back to the international community and the Commonwealth family.

I very much hope to welcome President Barrow to the Commonwealth Heads of Government meeting in London in April.

It would be recalled that The Gambia pulled out of the Commonwealth of Nations in 2013 under the former Dictator Jammeh's regime.

In February 2017, after the swearing-in of HE Adama Barrow as president, the British Foreign Secretary Boris Johnson visited The Gambia.

Jungler says he will testify against Jammeh even at ICC