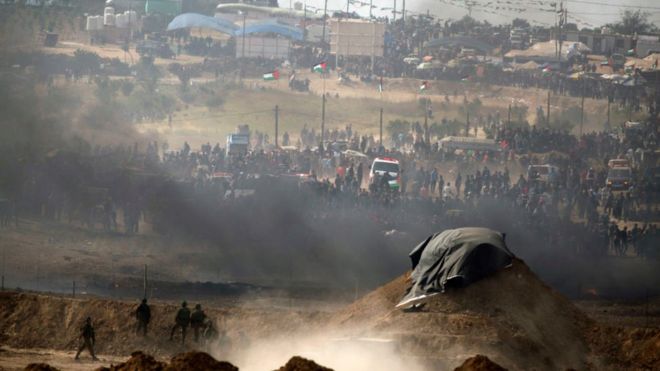 More than 30 Palestinians have been killed by Israeli gunfire since the start of "Flag Friday" demonstrations two weeks ago.

Another man died this Friday, the Palestinian health ministry says.

Protesters want refugees to be allowed to return to ancestral land now in Israel.

But Israel says the militant group Hamas, which dominates Gaza, is orchestrating the demonstrations in order to launch attacks.

Islam Herzallah, 28, reportedly died in hospital after he was shot by Israeli troops east of Gaza City.

Israel's army estimated there were 10,000 people "rioting" on Friday, with some attempting to breach the fence with firebombs and explosive devices.

The military has said it will not allow protesters to break through the fence and the country's defence minister, Avigdor Lieberman, has warned protesters they are putting their lives in danger if they approach it.

On Friday Mr Lieberman said there were fewer riots on our border because "the other side" had understood Israel's resolve.

The UN issued a statement last week condemning the violence and urging all sides to "exercise maximum restraint". 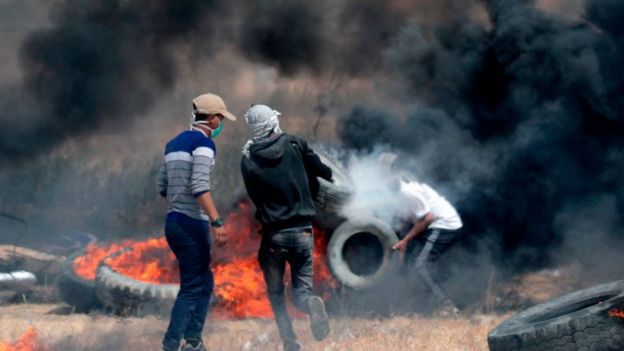 Palestinians burned tyres to create smokescreen on the border

Organisers call the rolling protests the Great March of Return.

They will culminate on 15 May, the 70th annual commemoration of what Palestinians call the Nakba, or Catastrophe, of the displacement of hundreds of thousands of their people in the war which followed Israel's creation in 1948.

Five camps have been set up on Gaza's border with Israel as part of the demonstrations.

Two journalists were also wounded on Friday, according to the Palestinian journalists' syndicate.

A Palestinian journalist was wounded in the border clashes last Friday and later died of his injuries. Israel's army said it was investigating the photographer's death.