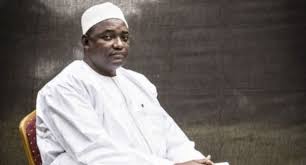 My Lord, the Chief Justice

Honourable Speaker of the National Assembly

Honourable Members of the National Assembly,

Family, Friends, Relatives and Associates of Vice President of The Gambia, BadaraAlieuJoof

Members of the Diplomatic and Consular Corps

This is a solemn day in the annals of Gambian history, triggered by the untimely passing on of the country’s sitting Vice President, His Excellency, BadaraAlieuJoof.

As the whole nation mourns, it is with a great sense of loss and a very heavy heart that I deliver this tribute in remembrance and praise of a close colleague, friend, and brother, who sadly worked as my Vice President for less than a full year when he succumbed to a brief illness.

His rise to the position of Vice President was occasioned by the integrity, competence, and industry he outstandingly displayed during the five-year transition period he served as Minister of Higher Education, Research, Science, and Technology in my government from 2017 to 2021.

Honourable BadaraAlieuJoof will be remembered in multiple ways, among other reasons, owing to the uncountable lives he touched, the various institutions he influenced or served in, his multi-faceted character and talent, and the numerous roles he played during his sixty-six-year lifespan.

Badara was without question a formidable statesman, a scholar par excellence, a talented administrator, and a naturally gifted leader of rare courage and integrity. He was a compassionate husband, loving father, a trusted friend, and a colleague of many shades.

His experience, spanning from the First and Second Republic to the new democratic dispensation under my leadership, makes him one of the truly exceptional and accomplished Gambian citizens.

Vice President Joof had the fortunate privilege of serving the country in various capacities. During his career in public service, he climbed from the lowest rank of the Public Administration Cadre as Assistant Secretary to the top as Permanent Secretary in several Government Ministries. These included the Ministries of Basic and Secondary Education, Youth and Sports, and of Local Government, Lands and Regional Administration.

Along the way, he initiated decisive Government policies and programmes. As Permanent Secretary, for instance, he led the mid-term review of The Gambia’s fifteen-year Education Policy 1988-2003, which significantly changed the education landscape in the country, and he boldly master-minded the famous Local Government Decentralisation Policy.

As a Cabinet Minister, Honourable Joof worked like a real professional to oversee the development of the Tertiary and Higher Education Policy, the review of the National Accreditation and Quality Assurance Authority Act, and the formulation of the current National Research Policy. He also passionately championed the transformation of The Gambia Technical Training Institute into the emerging University of Applied Sciences, Engineering and Technology, and The Gambia College into a degree-awarding institution.

BadaraJoof was among the highly reputable brains of The Gambia. Outside Government, he worked for the World Bank as an Education Specialist for over a decade. Before his appointment as Minister in 2017, he was a World Bank Regional Director for West and Central Africa.

Those who know his professional career very well would readily confirm that BadaraAlieuJoof was an intelligent and meticulous administrator and diplomat, who was firm but flexible, lovable and warm.

He had a sharp sense of humour that he often displayed and blended with witty remarks, which made his company delightful. He was honest and blunt. In his own words, he enjoyed telling the truth, with the belief that telling the truth was the right thing to do and the best way to put things together.

In one of his speeches, when he said he did not mind losing his job for telling the truth, he was merely emphasising this principle. Badara was indeed a principled gentleman and could never walk out of any job, nor betray the confidence I reposed in him.

He had a taste for quotations and was renowned for his eloquence and proficiency in English, a subject he taught at Nusrat Senior Secondary School in the 1980s.

The Gambia has certainly lost an illustrious son, a national asset and a pillar in Cabinet who contributed constructively to Cabinet proceedings. He was dependable and generously shared his knowledge, experience, and expertise. In truth, he selflessly devoted all his life to the service of his country and to humanity in various ways.

Many Gambians looked up to him as an icon, mentor or role model, and he taught or influenced many people, most of whom subsequently rose to occupy very senior and notable positions of authority in the country. As our wise elders would say, a gigantic tree has fallen, and many birds will now find elsewhere to rest.

May his memory be a source of blessing, strength, and inspiration for the entire nation, including his dear ones, associates, and friends.

I pray that Allah blesses his family and gives us the fortitude and wisdom to complete the work we started together and admit him to a lofty position in Paradise among the most honoured servants of Allah.

With this, Honourable Joof, we bid you farewell with honour. You have departed prematurely, but honourably.

Zealously and committedly, we began the march towards 2026 together, unaware that this calamity closely lay ahead. We will continue the march to accomplish our pledge to the nation.

Parting is an inevitable aspect of life, so we must part someday. On behalf of the Government and People of The Gambia, I assure you, Vice President Joof, that your noble footprints are visibly marked on this land already, which history will preserve forever.

Fare thee well and remain in Allah’s mercy. When we lay you to rest, we ask that the gentle angels of the Lord receive you most kindly.

Adieu my Honourable Vice President. You carry with you the love, admiration, respect, prayers, and well wishes of the people you sought to serve with frankness and devoted sincerity.

Farewell and rest in peace in the highest stations of Janatu-l Firdawsi. We ask this in the Name of the Most Beneficent and Most Merciful Allah. Ameen.