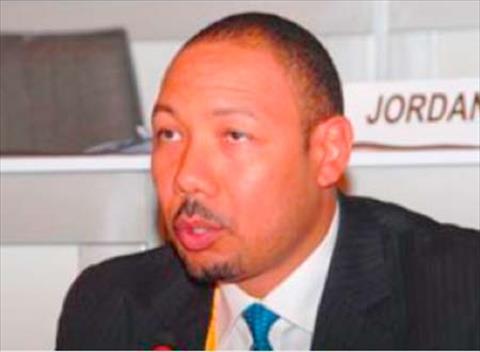 Edward Singhatey, former member of the Armed Forces Provisional Ruling Council (AFPRC) and current vice president of the ECOWAS Commission in Abuja, Nigeria, yesterday appeared before the Janneh Commission in relation to loans given to The Gambia government from the Republic of China on Taiwan.

During his testimony, he told the commission he is currently working in the said portfolio in Nigeria from March 2016 to date; adding that he was nominated by The Gambia government and appointed by the ECOWAS Chairman and the term of service is for two years.

The former member of the military junta, cum-lawyer, testified that when they took over in 1994, there was a transitional programme to review the constitution, as well as improve infrastructural developments, as children were working long distance carrying tables to school and there were only two hospitals.

He said somebody,  Ebou Jallow, advised them to negotiate a loan with the Republic of China on Taiwan, and that they may be given a loan of $50,000,000. He further stated that Ebou Jallow was part of the delegation that went to Taiwan including the minister of Finance, Balla Garba Jahumpa.

However, he said they were informed that Taiwan was ready to disburse the sum of $35,000,000 as a loan but not a grant; adding that they were told that if they had diplomatic ties with Taiwan, they may get the loan and the sum of $30,000,000 was disbursed into a Central Bank account. He said he later heard that Captain Ebou Jallow came with $5,000,000 cash and he asked why the $5,000,000 was brought in cash without being deposited.

Mr. Singhatey further testified that he later called the governor of the Central Bank to liaise with Mr. Wadda for the money to be deposited into the account; adding that the money was deposited but he did not find out how much it was. He said he had never held $2,000,000 in cash neither did he see the money which was brought by Captain Jallow.

At this juncture, Counsel Bensouda told him that $5,000,000 was brought in cash and asked him why it was not deposited at the said bank. In response, he said he was told that the Ministry of Finance did not know anything about the money and that the Finance minister attended a meeting to negotiate the said loan.

However, the counsel told him that the evidence before the commission was that he was part of those who deposited the money in the CBG account but he responded that he did not physically take the money to the bank but rather instructed for all monies to be deposited into a government account. He added that the then minister of Finance attended a meeting to negotiate the loan, further stating that whatever loan was negotiated it should have been recorded in the loanbook at the Ministry of Finance.

The legal luminary confirmed that it was alleged that Captain Ebou Jallow stole $3,000,000 but he did not know that Jallow was a sole signatory to the account; adding that the time he withdrew his signature, he thought that due process would be followed by the Ministry of Finance but instead he was told that Mr. Jallow stole the said sum.

Mr. Singhatey testified that he could not recall whether there was specific instruction for the Ministry of Finance to take care of the disbursement of the funds, and what he was able to remember was that instructions were given to keep the funds in a special account.

According to him, when Captain Ebou Jallow left the jurisdiction, he resigned as member of the council and a Swiss bank informed them that Jallow had transferred the said sum to a private bank, and the governor of CBG was instructed to recover the money. However, he said he could not recall the sum which was transferred.

He said he was also not aware of any Swiss bank account operated by the former president and it never came to council, further stating that what he could tell was that the said money was to be deposited at CBG but not in a bank in Switzerland. He disclosed to the commission that nobody had confronted the president about the alleged theft as well as operating an account in his name in Switzerland.

The witness testified that the negotiation of the loan was not the only reasons they sent a delegation to Taiwan, but they benefited from Taiwan in terms of infrastructural development; adding that the only complaint he knew was for the recovery of the $3,000,000.

He further revealed that there were no records of account or bank statements presented to the council by the former president. When asked by counsel, he said they were accountable to Gambians and this was why there was both an Auditor and Accountant Generals as they were supposed to audit themselves, noting that monies were deposited at CBG because they were government funds.

He said he believed at the time there was a backlog of government accounts which were to be audited, further testifying that he could not remember whether the said money was accounted for. Mr. Singhatey revealed that the AFPRC at the time was accountable.

According to him, they did not learn that the money deposited at CBG was altered; further stating that he was not privy to how Ebou Jallow absconded with the said $3,000,000 and it was possible to alter the account without the knowledge of council members.

Responding to Commissioner Bai Mass Saine on whether there was a higher authority for the transfer of the said money, he said the minister of Finance must have been aware of the transfer; adding that the governor of the bank would not Mr. Jallow alone to make such a transfer but the former president was directly in touch with the governor.

Mr. Singahtey intimated to commissioners that they would not have allowed the former president to run an account in Switzerland; adding that perhaps there were a lot of things going wrong which was never brought to light. He said there was no detailed report mentioned to Cabinet

He revealed that from 1997 onwards, it appeared that the former president had taken control of bilateral relation with Taiwan, and the former president did not discuss with them as to how much Taiwan had disbursed to The Gambia but was of the view that it exceeded $35,000,000.

He further revealed that the late Baba Jobe was directly dealing with the former president, and they were not privy to what they were doing; adding that he did not believe that Baba Jobe had anything to do with the account at CBG, and that he was not aware that there was an overdraft of $28,500,000 from the account but what he knew was that there was an issue with the International Monetary Fund (IMF).

He finally highlighted on some of the achievements they registered, such as the University of The Gambia, health facilities, and schools among others. However, he also highlighted the weaknesses of the former government including gross human rights violation.

Earlier, the chief of protocol, Office of the President,  Alagie Ousman Ceesay, testified in connection to the office of the former  first lady’s Operation Save the Children Account.

In his testimony, he confirmed that Dr. Buba Badjie had received $1,000,000 in connection to a poultry project for the former president and there was an instruction from the former president for the said sum to be disbursed to him. However, he said he could not remember seeing materials but he knew that some machines were sent in relation to the project.

He confirmed that he served as a signatory to both the first lady’s and Animal Feed accounts; adding that he thought that the office of the former first lady was opened in 2014 and he was redeployed there the same year.

According to him, he joined the office of the former president on the 16 October, 2014, and that the first lady instructed him to go to Guaranty Trust Bank to get a form for the opening of the account and was asked by her to become a signatory to the account.

“I went to the bank and made three transfers on the same day. I also had different accounts for those who were supposed to be paid,” he disclosed. He added that MYJ was another account and at times he was asked to deposit monies into the account.

He further explained that one of them was supervising the teachers and he did travel from the U.S.A. while there was a leased apartment for the teachers at Laybato Hotel.

Documents relating to a telex transfer he made was shown to him, and he confirmed that the transfers were made on behalf of the former first lady over the counter, and the said documents were admitted as exhibits.