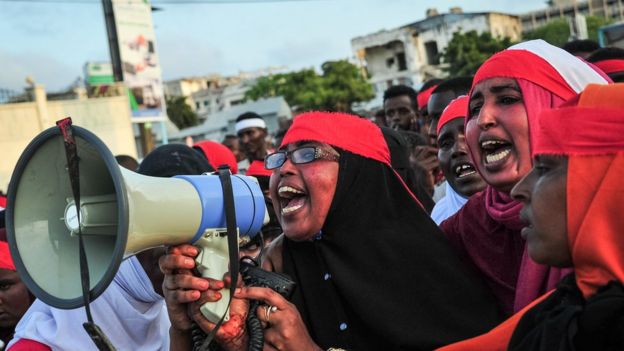 A red bandana has become the new symbol of protest in Mogadishu as anger over the city's most destructive bomb attack is boiling over on to the streets.

Men and women in the city, security officers, even government officials – all are wearing a piece of red cloth around their foreheads to show unity and solidarity for the hundreds of people killed and injured in Saturday's massive truck bombing.

"It represents the blood of my people who have been killed in the explosion," said one girl pressed up against the fence at the national stadium for a demonstration organised by the city.

"If the Somali people unite they can defeat everything," another said, red cloth wrapped around her hijab.

The crowd chanted anti-al-Shabab slogans as they waited for the mayor of Mogadishu, the prime minister and the president to arrive.

Thousands came. It was something never seen before in the aftermath of a bomb attack.

There have been small protests in the past but people have been afraid of being targeted by the Islamist group.

This demonstration, and the rioting in the streets at the scene of Saturday's blast, betrayed a real change of atmosphere in Mogadishu – from fear to anger. 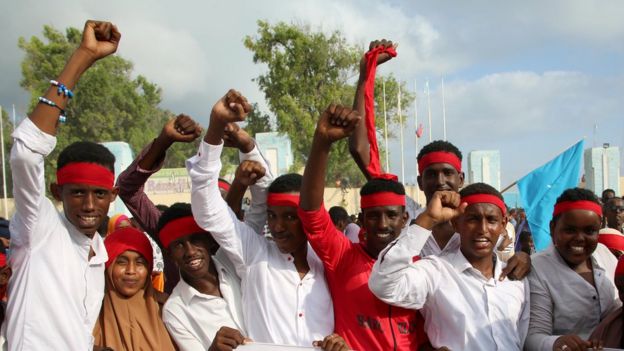 And that's why this bomb attack is different – why this could be a turning point.

"We are telling [al-Shabab] that from now on, we are all soldiers and will come to you. We will no longer tolerate a Somali boy being killed and a Somali girl being killed. And we'll defend this flag."

But the crack of gunfire near the scene of the blast at K5 – the Kilometre Five junction – was perhaps a stronger indication of public feeling. 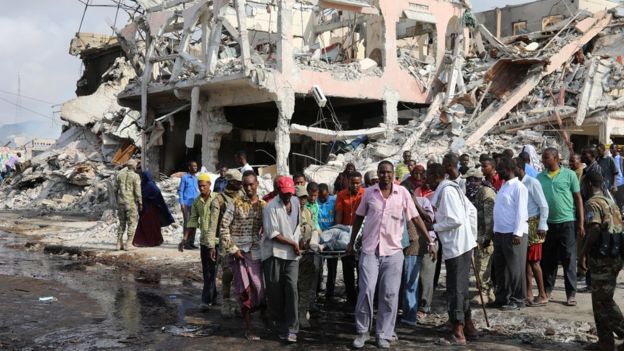 Stones were thrown, guns fired, people killed – for no reason other than the crowd was angry and had only a few security officers to channel that anger against.

That anger needs to be handled carefully and directed well – against al-Shabab, not the government or security forces for not doing enough to stop these attacks.

Al-Shabab have not said they carried out this attack, perhaps because of the number of civilians killed.

K5 was probably not the target. Security sources say the truck had travelled through a number of lighter checkpoints, with its cargo of homemade and some military grade explosives disguised with sacks of rice. When it reached Kilometre Six, suspicions were raised and the security forces called ahead.

The driver detonated his explosives before he could be stopped. It seems to have been a coincidence that he did so next to a petrol tanker, upping the death toll.

At one of Mogadishu's busiest junctions at one of the busiest times of the week, the blast tore through the traffic-jammed streets and crowded pavements.

In the past, "complex" al-Shabab attacks involved a first, smaller bomb at a security gate allowing a second, larger bomb to get through and cause greater damage.

In this case a second, smaller car bomb was intercepted and the driver arrested just before it exploded – killing and injuring a number of people. The driver is accused of taking part in a previous large-scale attack in Mogadishu and is believed to be a member of al-Shabab.

The vehicles were travelling along different routes but they appeared to be moving towards the airport – the "green zone" of Mogadishu where the UN and many international embassies are based. This may have been the target or maybe the foreign ministry or a new Turkish military base.

Kunta Kinte (The Slave That Got Away – Kunta The Gambianhero’