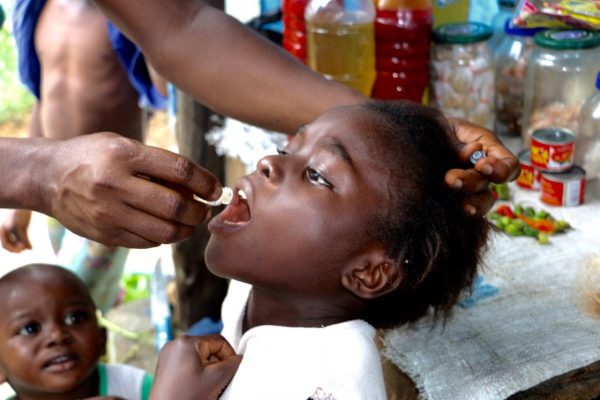 The biggest cholera vaccine drive in history is underway in Africa aimed at reining in a spate of outbreaks across the continent, the UN and charity alliance Gavi said Monday.

More than two million people will receive the oral cholera vaccine as part of five major campaigns in Malawi, Nigeria, South Sudan, Uganda and Zambia, Gavi said, adding that the campaigns should be complete by mid-June.

“This is an unprecedented response to a spike in cholera outbreaks across Africa,” Gavi chief Seth Berkley said in a statement.

At least 12 regions or countries in sub-Saharan Africa are currently facing cholera outbreaks, according to Gavi and the World Health Organization.

According to the UN health agency, cholera infects 1.3 million to four million people every year and kills an estimated 21,000-143,000 — mainly in poor countries.

The ongoing campaigns in Africa are being implemented by the health ministries in the five countries, where thousands of cases of the disease have been reported.

The vaccines themselves come from a global stockpile, which has grown substantially in recent years, in step with the recognition of the role the vaccine can play in halting the spread of the bacterial disease.

‘Key weapon’
“Oral cholera vaccines are a key weapon in our fight against cholera,” WHO chief Tedros Adhanom Ghebreyesus said in the statement, stressing through the need also to improve access to clean water and sanitation, train health workers and work with communities on prevention.

Cholera, which causes potentially deadly diarrhoea, is contracted by ingesting food or water contaminated with a bacterium carried in human faeces and spread through poor sanitation and dirty drinking water.

Left untreated, it can kill within hours.

WHO recommends giving the oral cholera vaccine in two doses, the first offering protection for six months and the second for three to five years.

“We have worked hard to ensure there is now enough vaccine supply to keep the global stockpile topped up and ready for most eventualities,” Berkley said.

Some 360,000 doses of the vaccine have meanwhile been shipped to Uganda, where the Kyangwali camp housing Congolese refugees is facing a cholera outbreak that has killed dozens and left more than 900 in hospital.

In this campaign, only one dose is being provided per person to increase the spread. The country is also planning to vaccinate 1.7 million more people in coming months.

Another 113,800 doses have also been shipped to South Sudan as a prevention measure ahead of the war-torn country’s rainy season.

And 667,100 doses are being delivered to Zambia as part of a second round of vaccination after a major outbreak infected more than 5,700 people and killed more than 100.

“With this historic cholera vaccination drive, countries in the region are demonstrating their commitment to stopping cholera from claiming more lives.”