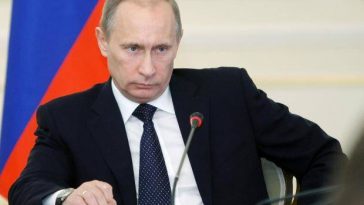 Sometimes in October 2015, we shared a  reflection  on this statement of Vladimir Putin. Since then, many events have followed one another which, in the eyes of many, are amply sufficient to demonstrate the bad faith of the United States and its NATO allies in the search for true peace.

With such interlocutors, according to the skeptics, no political solution is possible. Putin’s tolerance of sanctions and attacks on Syria leaves many completely disconcerted. According to them, during the last attack, Putin should have gone to military action, destroying the military arsenal of invaders in missile firing position against Syria.

It must be believed that Putin’s reading of this situation still leaves a credible space to avoid this “total” war. In fact, the latest missiles against Syria did more damage to the prestige of the United States, France and England, than they did in Syria. Their level of global credibility has dropped several notches, both in terms of messages transmitted and targets reached.

In other words, it is a military and communication fiasco. According to the information circulating, Russia had a fairly accurate portrait of this attack and could count on the high level of weapons available to Syria to avoid the deaths and destruction of major infrastructure. In short, there was no reason to justify the great attack of the “last judgment”.

For the moment, the instructions shared between the United States and Russia have made it possible to avoid crossing the  red lines , specified by Russia to its adversaries, and to reduce the damage to human life and military infrastructures. planned by the coalition: United States, France, England. This approach is likely to discredit more and more attackers who turn out to be militarily inefficient and always less convincing at the level of world public opinion.

Can we blame Vladimir Putin for playing the card of tolerance and some carelessness that leads his opponents to make themselves Hara-kiri. The more they sink into their own lies and the more they get bogged down in second-rate warrior adventures, the stronger Russia and its allies become.

This patience and tolerance of Putin is not the result of any weakness, but that of a full control of himself and the situation. He is not a warrior, nor a conqueror in search, by all means, of power and wealth. Its reference is the Charter of the United Nations and respect for international law.

There is no urgency to actuate the red button of what will be the last of the great wars. As Putin says, there will be no more life on earth. His approach will probably deter even some of his opponents to operate the red button.

H.E Adam Barrow The President of The Gambia has bilateral talks with the Norwegian Foreign Minister