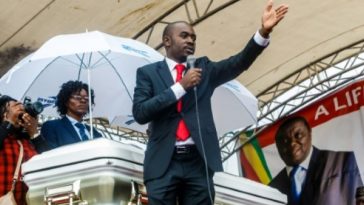 Zimbabwe’s main opposition candidate, Nelson Chamisa has challenged the credibility of president Emmerson Mnangagwa as a candidate that can deliver the reform and change that the citizens need.

In an exclusive interview with Africanews, Chamisa says Mnangagwa has failed to revive the economy as he promised when he took office in November last year.

We are optimistic and believe our chances are extremely high. We are looking at 75 percent plus in terms of our victory.

“Mr Mnangagwa was supposed to take over and take off, but instead he took over but he has not taken-off. Why, because he has been part of this system for the past 38 years, ‘’ Chamisa said.

Describing Mugabe and Mnangagwa as ‘ belonging to the same Whatsapp group’, a phrase used by young people to describe people with similar traits, the 40 year old insists that the president can only deliver the same suffering and plight that characterised Mugabe’s government.

Mnangagwa was Mugabe’s vice president, before he was fired in November, triggering a chain of events that led to the resignation of the latter.

Chamisa is the presidential candidate for the opposition coalition, Movement for Democratic Change (MDC) Alliance, having succeeded the late Morgan Tsvangirai who succumbed to cancer in February.

Campaigning ahead of July elections

The MDC Alliance has been holding countrywide campaign rallies ahead of watershed elections in July, the first in the post Mugabe era.

Challenging his critics who cite his age as a factor demonstrating lack of experience to lead the country, Chamisa says his experience is one of hardship that he shares with many Zimbabweans.

He mocks the ruling ZANU PF party whose ‘experienced’ leaders have ruined the country’s economy and democracy.

‘‘But look at what experience has given us, high unemployment rates, hyperinflation, cash shortages and dilapitated infrastructure.’‘

Chamisa also addresses the issue of internal wrangles within his own party, the Movement for Democratic Change – Tsvangirai (MDC-T).

His leadership of the party was contested by Tsvangirai’s deputy president, Thokozani Khupe, who was elected by the party’s congress while Chamisa was appointed by the late Tsvangirai.

Khupe has since been expelled from the party for not recognising Chamisa’s leadership, even as she insists on being the acting president.

‘‘Yes, certain leaders have been dealt with on account of indiscipline to make sure there is discipline within the ranks .We want to make sure that we stick to constitutionalism we stick to rule of law particularly in the context of our party because we have to be the alternative that we are selling.’‘

The opposition have also called for electoral reforms to guarantee a free and fair election. Chamisa explains that this is necessary because the country has a history of electoral fraud and violence resulting from disputed outcomes.

‘‘So we have 10 PEACE demands with a plan and environment for credible elections in Zimbabwe. We need to access the voters roll, access to public media , and we will ensure that there is no abuse of the military for partisan political interest by our colleagues in the ruling party.’‘

Mnangawa has previously guaranteed free and fair elections as he reassures investors that Zimbabwe is open for business.