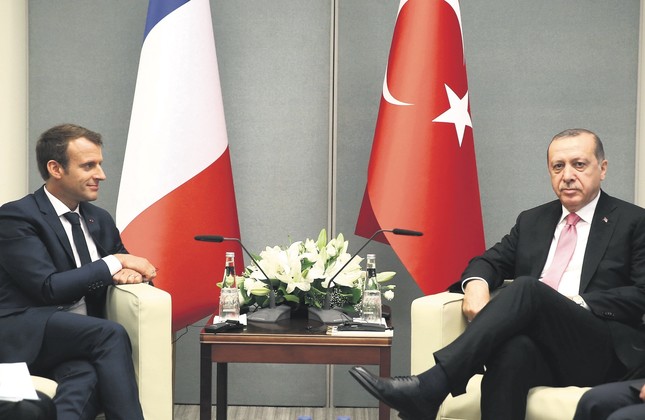 The tone goes up a notch between Turkey and France: after receiving a delegation of Kurdish leaders from Syria at the Elysee Palace on March 29, Ankara sees red and accuses Paris of encouraging terrorism.

On April 7, Turkish President Recep Tayyip Erdogan accused France of “encouraging terrorists”, witnessing tensions between Ankara and Paris on the Syrian issue. In question:  the reception on 29 March by Emmanuel Macron of representatives of the Syrian Democratic Forces (SDF) , an Arab-Kurdish coalition led by Kurdish militias YPG (People’s Protection Units), targeted by a Turkish military operation in the north of Syria.

“France encourages terrorists by receiving them at the presidential palace,” Reuters quoted Recep Tayyip Erdogan as saying in a speech to his supporters in the southwestern province of Denizli . And to clarify: “As long as Western countries continue to support terrorists, they will continue to be the target of terrorist attacks in response.”

As long as you feed these terrorists, the West will drown

According to reports by France 24 , the Turkish president also warned the European powers: “As long as you feed these terrorists, the West will drown.”

Prior to these statements by the Turkish head of state, his European affairs minister, Omer Celik, had already invited Paris to choose his side – between Turkey and the Kurdish militias – “as part of the fight against Daesh” in northern Syria. in an April 5 interview with Reuters.

Emmanuel Macron called for a dialogue between Turks and FDS

During his meeting with representatives of the Kurdish forces at the Elysee, Emmanuel Macron had hoped “that a dialogue can be established between the SDS and Turkey with the assistance of France”, while stating that Paris did not foresee not – contrary to what Kurdish officials claimed – “new military operation on the ground in northern Syria outside the international anti-Daesh coalition”.

The Turkish president had hardly tasted this French call for dialogue between Ankara and the Syrian Kurdish militias. “Who are you to talk about mediation between Turkey and a terrorist organization?”, Launched March 30 Recep Erdogan, before adding: “We do not need mediation. Since when does Turkey want to sit at the table of a terrorist organization? Where did you get that from? ” The Elysee had  brought the same day details of its proposals for mediation .

Turkey launched in late January the military operation “Olive branch” in northern Syria, without permission from Damascus, to drive out Kurdish militias YPG of the city of Afrin. On 18 March, the Turkish army and its allies, including the rebels of the Free Syrian Army (ASL), regained control of the city. A military conquest, tainted by plunder scenes reported by AFP, against which Western chancelleries have raised the tone