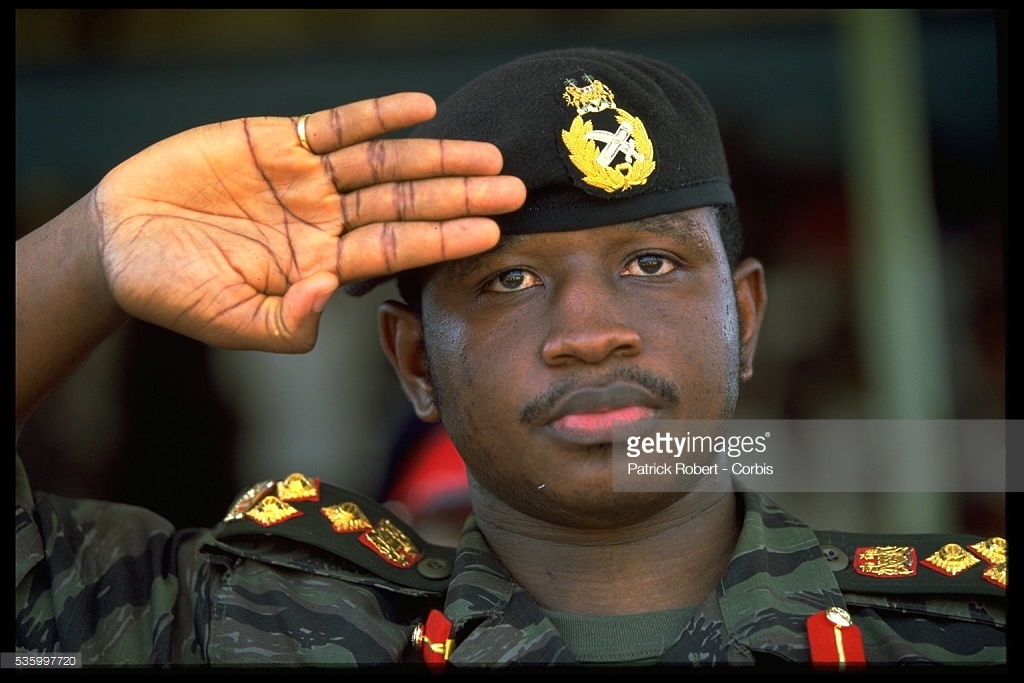 Former opposition leader Julius Maada Bio is Sierra Leone’s new president after garnering 51.81 percent votes in last month’s election. This is his second attempt at the presidency as a civilian years after he ruled the country briefly as the head of the military junta. He beat the All People’s Congress (APC) Samura Kamara, who got 48.19 percent of the votes.

Bio takes over from President Ernest Bai Koroma, who served two terms in an office that was riddled by an economic crisis, an Ebola epidemic in 2014 and last year’s mudslide that killed 500 people.

Bio has promised to revive the economy, deal with corruption and the country’s poor education system.

But what more do we know about the former soldier?

1. Bio was born on May 12, 1964, in Tihun, a rural town in Sogbini Chiefdom, Bonthe District, in the Southern Province of Sierra Leone. He graduated from the prestigious Bo School for Boys in 1984. In 1985 Bio joined the Republic of Sierra Leone Armed Forces as a cadet at the Military Training Academy in Benguema, on the outskirts of Freetown. He graduated from the military academy as a Second Lieutenant in October 1987. His first post as a commissioned officer was at the Lungi Garrison in Port Loko District in 1987. Bio holds a Masters Degree in International Affairs from American University in Washington D.C. The 53-year-old is currently a Senior Research Fellow at the prestigious University of Bradford in the UK pursuing a PhD in Peace Studies.

2. Bio ruled the country briefly after staging a palace coup in January 1996 to overthrow Captain Strasser’s military government. This came on the back of a division within the ruling Supreme Council of State over whether to introduce multi-party elections that year. Bio had said at the time that Capt Strasser wanted to relent on his promise to hand over power to an elected civilian government. Bio’s tenure as Head of State was just three months long, during which he conducted elections and left power after Ahmad Tejan Kabbah was elected president. He subsequently resigned from the Sierra Leone Army and migrated to the US where he lived for about a decade and continued his education. His supporters have since been calling him the “father of democracy”.

Attempted to rule again in 2012

3. Bio in 2005 officially became a member of the Sierra Leone People’s Party (SLPP). That same year, he ran for the leadership of the SLPP at its national convention in Makeni but came in third. In July 2011 Bio was elected as the SLPP’s presidential flag bearer for the 2012 elections. He faced off with Ernest Bai Koroma of the ruling APC and was defeated after winning 37% of the votes. Bio did not give up; he became an active force within the SLPP and subsequently made the party a force to reckon with. In September 2017 the party elected him to lead them as the flag bearer in the 2018 presidential election, which he eventually won.

Established a foundation for underprivileged children

5. When he was in his late 20s, Bio was part of a group of soldiers who overthrew the government in 1992 after nearly 20 years of one-party rule in the country. Alongside a group of young soldiers including Captain Valentine Strasser, Lieutenant Sahr Sandy, and Lieutenant Solomon Musa, Bio overthrew the All People’s Congress (APC) government of President Joseph Saidu Momoh in a bloodless coup. The young soldiers formed the National Provisional Ruling Council (NPRC) with Strasser as their leader and Head of State of Sierra Leone. They ruled from 1992 to 1996. Bio later became deputy head of state from 1994 to January 1996.

He is married to a Gambian national

6. Bio who is a practising Roman Catholic Christian is married to Fatima Bio, a practising Muslim. She is a Gambian national even though she grew up in Kono District in Sierra Leone. The two got married in 2013 in London and have one child together. Bio already has three children from a previous marriage.