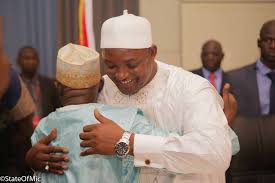 The secretary general and leader of the United Democratic Party (UDP), Ousainou Darboe, has called on Gambians to support President Adama Barrow in the spirit of nationalism and patriotism in other to avert another commission for the country in future.

“Let’s be careful not to make him dirty and let’s be careful to do anything that will warrant us to have another commission for the country that would investigate Adama Barrow and his government,” he said. “It’s our responsibility in ensuring that does not happen.”

“So let’s be careful to avoid doing anything that tarnishes the image of the president or makes him dirty. Because if we do that; our fight to remove Yahya Jammeh would be meaningless.”

The UDP leader said if people that President Barrow trusts only act to full their pockets, then the struggle to oust Jammeh would be translated as doing exactly what Jammeh was accused of doing. “I hope that Honourable Dembo Bojang and those of you at the high table are listening to me.”

President Barrow, he said, has trust and confidence in the people he appointed to sensitive positions so that they do things as expected.

“You have to do things that the government wants from you. Because if you don’t do that; then there will be another commission,” he warned. “I don’t want to go to the commission and start saying that I can’t recall that; I can’t recall this.”

He challenged supporters of the UDP to support each other. “When it was difficult during Yahya Jammeh’s time; when they would knock at your doors and wake you up late at night and take you away to unknown places. But that did not stop us or separate us.”

“Now there is peace. Let’s support each other and vote for any person that is selected as that is the only way that can move the country forward,” Darboe noted.

Commenting on the much anticipated Local Government elections, the UDP leader called on his supporters to redouble their support for the party in ensuring that they get 95% of the seats countrywide.

“We have to make sure that we win the entire seats so that what Adama Barrow wants to do for the local authorities can be achieved,” he said

He called on his party supporters to be law abiding and redouble their support for the party. “We will not allow anybody to make us angry in order to create a problem for the country.”

Dembo Bojang among other party executives also spoke at the political rally.

Mr. Bojang called on their supporters to redouble their support for the party and vote massively for their candidates in the next Local Government elections.

‘Barrow will lose power if he prays with Ahmadis’