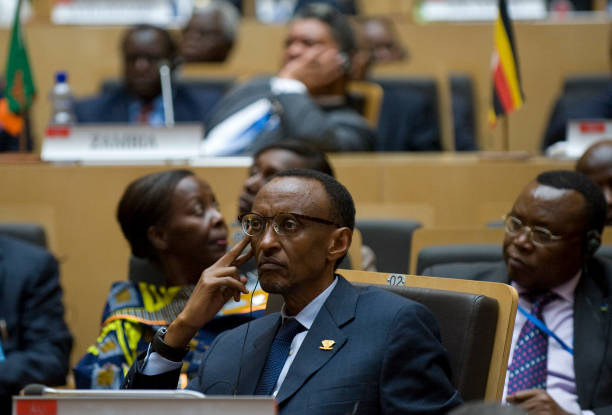 The Assembly of Heads of State and Government of the African Union (AU) meeting at their 30th Ordinary Session at the AU Headquarters in Addis Ababa, Ethiopia, elected on 28th January 2018 a new bureau to pilot the activities of the Union for the year 2018.

In his acceptance speech delivered in the backdrop of the theme of the year 2018: “Winning the Fight against Corruption: A Sustainable Path to Africa’s Transformation”, President Paul Kagame said it is a solemn honour, to accept the call to serve as Chairperson of our Union. He expressed his gratitude to the Heads of State for their double trust. First as the leader of the reform process and now as the leader of the African Union

“I promise to do this with you and do the best job I can. Obviously, I will need your full support” he said, before acknowledging the high experience of his predecessor, saying “President Alpha Condé is a professor, a teacher, and I can safely say that I have learned from him. I have also seen his very big heart for Africa. Congratulations Mr President”. He called on his peers to join him in paying tribute to President Conde’s impeccable service to our organization. “I have been lucky to work with his predecessor President Idriss Deby, and even luckier, to work with both of them. I want to assure you that I had a lot of wisdom flowing from them”, said Kagame.

President Kagame further said the programmes, policies, and priorities of the African Union contain the right tools for the job. “I wish to pay tribute to previous leaders of the African Union, and to former Heads of State, for paving the way forward”. He added that, there is tremendous value in the African Union’s flagship initiatives, such as Agenda 2063.

H.E. Professor Alpha Condé, outgoing Chairperson of the African Union (AU), and President of the Republic of Guinea during his chairmanship in 2017 appointed H.E. Nana Akufo Addo, President of the Republic of Ghana, as Champion on Gender and Development in Africa. Promoting women to high-level positions, the Republic of Guinea under the leadership of H.E. Pr. Alpha Condé, for the first time since its independence welcomed the largest number women in his government to high office, including the Ministry of Economy and Finance; several National Directorates or Autonomous Services.

While the Summit this year’s concentrating on tackling corruption, the presentation outlined how the AU among many other global players is coming to recognize and seek to harness the powerful contributions of faith and faith actors in order to reach their goals.

H.E. Mr. Moussa Faki Mahamat, Chairperson of the African Union Commission, in his address boldly stated that to date, the African Union is the first inter-governmental organization that made parity a reality at higher decision-making levels. Applauding the placement of women in management positions in the Commission, he accounted that between 2013 and 2017 the gender gap reduced in strategic positions and the increase from 29% of women to 45% currently on Director’s positions; cognizant of the fact that yet more needs to be done.

President Buhari congratulated the African Union for dedicating the theme of the year to the noble cause of fighting corruption on our Continent. He thanked the African Heads of State for entrusting him with the responsibility of serving as the Champion of the theme of the year. He pledged that he will do his very best to ensure that the anti-corruption agenda will receive the attention it deserves and make the impact we all hope for, during 2018 and beyond.

Addressing invitees from the African Union Commission Summit, local and international media, and global and regional development organizations, the Commissioner for Economic Affairs of the AUC, Prof. Victor Harrison, endorsed the report, urging African countries to adopt the recommendations for inclusive growth. “These studies present the behaviour of African economies in the face of difficult external conditions and announce the revival of growth with an estimated rate of 4.1 percent in 2018. We all know that growth is not yet inclusive in Africa, and unemployment affects more women and young people,” he told the audience.

In another development the AU-EU-UN Task Force on the Stranded Migrants situation in Libya on held its Second meeting of the year in Addis Ababa, Ethiopia, and the Sixth since the establishment of the Task Force during the AU-EU Summit in Abidjan in November 2017. The meeting was held under the Chairmanship of the Special Envoy of the Chairperson, H.E. Madam Amira Elfadil, and Commissioner for Social Affairs. It was attended by the EU Ambassador to the AU and the IOM representative to the AU.

The Commissioner of Social Affairs applauded the efforts of the Libyan authorities in facilitating the voluntary evacuations, particularly in expediting the issuance of landing rights permits and facilitating AU and other stakeholders’ missions to Libya.

The outgoing Chairperson of the AU for 2017, H.E. Prof. Alpha Conde, President of Guinea, appointed H.E. Nana Addo Dankwa Akufo-Addo, President of Ghana, as the African Union’s Champion for Gender and Development Issues. As part of his vision for this important role, the President of Ghana launched the Gender and Development Initiative for Africa (GADIA).GADIA is an unprecedented flagship programme and implementation framework for the President’s AU Gender and Development Championship.
Newly Elected Chairperson of the African Union, H.E. Paul Kagame, President of Rwanda also officially launched the first phase of the Single African Air Transport Market (SAATM) championed by twenty-three African countries at the Headquarters of the AU, a historic and a vital milestone towards the continental effort to start the implementation of the 1999 Yamoussoukro Decision.